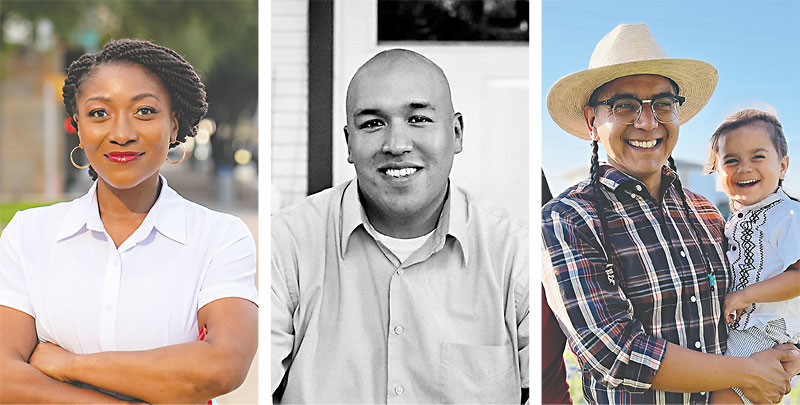 It’s all about housing affordability for José Velásquez and most of the Eastside candidates in this year’s city council races. “Everybody who comes to the Board right now talks about affordability and that makes me so happy,” Velásquez said. “I just watched my community being decimated by gentrification. And I’m not knocking anyone who wants to live in East Austin or District 3, but we have to find a place where we can make it affordable.”

Velásquez is the favorite in the D3 six-man race, with the backing of incumbent Pio Renteria and much of the Democratic Party establishment. He is the great-nephew of the legendary Roy Velásquez of Roy’s Taxi, an informal adviser to Lyndon Johnson, and his family has been part of the Eastside political landscape for a century. “I did my first petition when I was 11 and I haven’t stopped serving my community ever since,” Velásquez said.

Jose Noe Elias immigrated to Austin from Mexico when he was 8 years old and lived undocumented for 20 years, earning a master’s degree in education. He’s a teacher in Montopolis, one of the city’s most gentrified neighborhoods, and wants to encourage community-centered public safety, fair transportation, and more housing for working-class families. “The question is basically what kind of housing for whom,” Elias said. “If there is [a proposal to build] a five-story complex, but my families can’t afford it, so of course I would be opposed to that.”

Daniela Silva is the daughter of an undocumented immigrant and has also excelled in higher education. She volunteers with the Austin Justice Coalition, Community First! Village, and others, and supports environmental justice and equity-focused transit development. Bertha Delgado had mounted a strong campaign that was overturned after the city denied her ballot application due to a 15-year nonviolent felony conviction; instead, longtime Holly Ward activist Gavino Fernandez, who has come forward multiple times over the years and has previously been allied with Delgado, was a late filer on Monday. Yvonne Weldon and Esala Wueschner also run in D3. Weldon wants to cut unnecessary spending and provide more funding to first responders; we couldn’t learn much about Wueschner’s priorities. District 3 includes Austin’s oldest Latinx neighborhoods on both sides of the river, from I-35 at Seventh Street east to Montopolis and south to Ben White, then west to I-35 near St. Ed’s.

Clinton Rarey, a former Army officer who served in Afghanistan, is one of the few candidates not concerned about housing. He’s running to reduce homelessness, hire more police, and cut property taxes. We couldn’t learn much about Misael Ramos’ campaign.

These three candidates are fighting a very uphill battle to unseat incumbent Natasha Harper-Madison. For her, it all comes down to housing. “When you dig deeper, you realize that all systemic issues, all manifestations of poverty, are directly linked to housing,” she said. “Every time, housing, housing, housing. And I don’t separate housing from affordability and I don’t separate affordability from mobility. Because they’re all directly connected…so you have to tackle to housing at the same time as affordability at the same time as mobility.”

Do you have something to say ? The the Chronicle welcomes opinion pieces on any topic from the community. Submit yours now at austinchronicle.com/opinion.

Cece Teneal celebrates her 20th birthday with a world-class concert