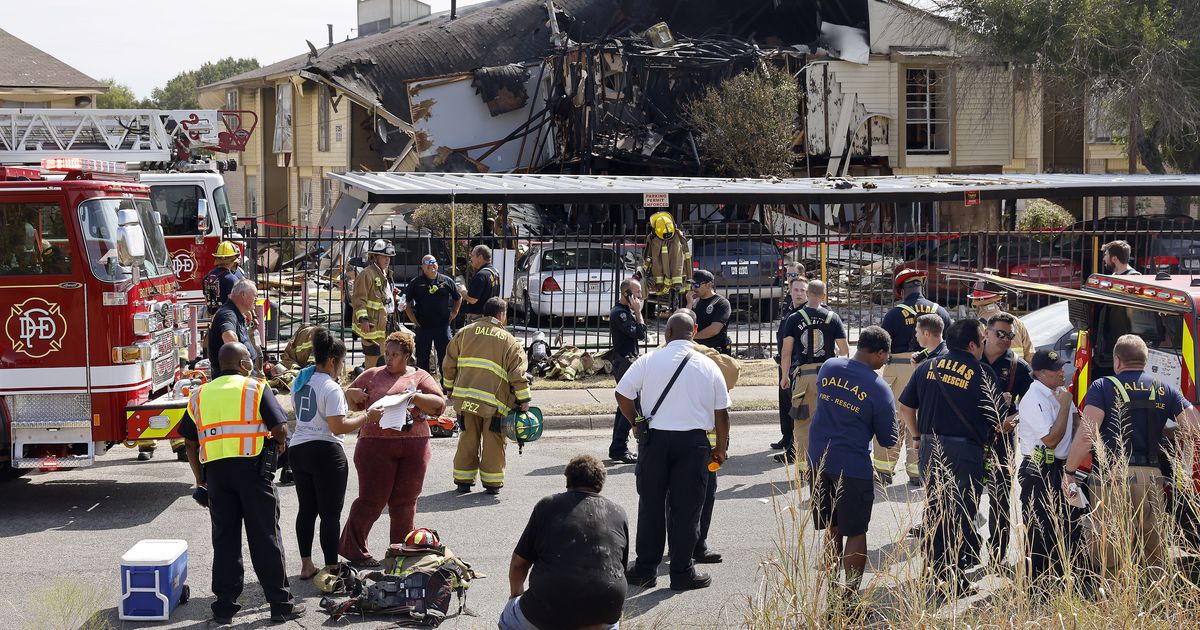 This is breaking news and will be updated.

Dallas Fire-Rescue was called about a gas leak at the Highlands Hills Apartments in the 5700 block of Highland Hills Drive, near Simpson Stuart and Bonnie View roads, at approximately 10:20 a.m.

When the firefighters arrived, they could smell gas near one of the buildings. The explosion happened while they were investigating, Dallas Fire-Rescue spokesman Jason Evans said.

At least eight people, including four firefighters, were injured in the blast, Evans said. Three of the firefighters were hospitalized in critical condition. The other firefighter and four people in the building were all stable.

Everyone in the building that exploded has been found, officials said.

Aerial footage showed heavy damage to a building in the apartment complex, with a corner of the two-story building destroyed and smoke billowing from a hole in the roof. Damaged windows were visible on neighboring buildings.

Evans said the west side of the building suffered extensive damage and charring from the resulting fire, making it too unstable for firefighters and first responders to enter and search thoroughly.

Evans was hesitant to call the explosion a gas explosion, saying investigators were still working to determine the cause. However, residents reported smelling gas in the area up to 12 hours before the explosion, he said.

“Everything was on fire”

Synicia Johnson was at home with her 17-year-old son in an adjacent building at the time of the explosion.

“I heard the sound of the kaboom and ran outside to see what was going on,” she said, adding that she had seen several people injured. “It was like a scary horror movie.”

Dashun Lawrence, who lives in a nearby apartment complex, said he felt a brick wall in the neighborhood rumble after hearing the explosion.

â€œI heard the boom and thought someone had crashed or something until I came over and saw that everything was on fire,â€ Lawrence said.

“Please pray for our firefighters and for the civilians who have been injured,” Johnson wrote in a tweet which called the explosion a “terrible situation.”

City council member Tennell Atkins, whose district includes the apartment complex, said his office down the street was evacuated around 11 a.m. due to the explosion.

Atkins and Johnson said the city is working hard to provide resources to displaced residents.

â€œThere are a lot of residents who are probably in need right now,â€ Atkins said. â€œThe people who live in the apartment have no place to go to. “

About 40 resort residents, including children, gathered under trees in neighboring Mountain Creek apartments as community groups helped distribute food, water and baby supplies. The group had been there since 10:30 a.m., said a resident.

A spokesperson for the Red Cross said his organization was setting up a canteen and working to reach residents of affected buildings.

Authorities did not know how many people were affected by the explosion or how many apartments were damaged.

In a written statement, Philadelphia-based Mountain Creek Apts LP, which owns the resort, said it was “gathering information and awaiting a report from firefighters on the cause” of the explosion. Property managers were working to find housing for the displaced residents, the statement said.

Atmos Energy officials did not immediately respond to a request for comment.

Between 2006 and 2018, more than two dozen homes in north and central Texas exploded due to a natural gas leak, an investigation by The morning news from Dallas find. Nine people died and at least 22 others were injured in the blasts.

Among the victims was 12-year-old Linda “Michellita” Rogers. His family’s home in the 3500 block of Espanola Drive exploded in the early hours of February 23, 2018, the morning after Atmos investigated and fixed leaks on a street just behind the house.

Atmos discovered 28 other leaks in the neighborhood in the days following the fatal explosion.

Federal investigators later discovered Atmos had known of gas leaks in the Northwestern neighborhood of Dallas for more than seven weeks before the explosion that killed Rogers.

COLUMN: Sominatis’ new video opens up a “world of beauty”