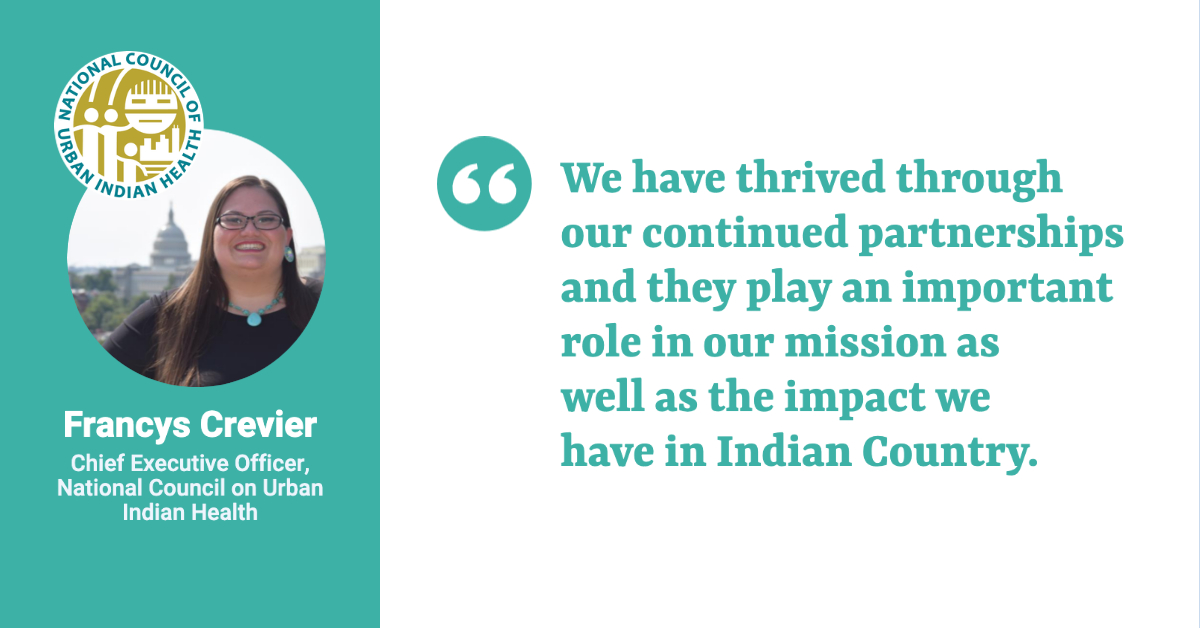 Today, most American Indians and Alaska Natives who live in cities have unique health needs. The Kresge Foundation has been an ally and partner of the National Urban Indian Health Council and recently tuned in for a chat with its chief executive, Francys Crevier. Below, Crevier explains how organizational partnerships have continued to support advances in health equity and pave the way for equitable health care in Indian Country.

Kresge: What is the National Urban Indian Health Council and what is the mission of the organization?

The NCUIH is the only national organization that focuses on and advocates for urban Indigenous health, and we provide technical assistance, training, policy support and other much-needed services to Urban Indian Organizations (UIOs) that provide health services to urban American Indians and Alaska Natives. located throughout the United States. For more than 20 years, the NCUIH has advocated for health equity for the urban Indian population. We envision a nation where comprehensive personal and public health services are available and accessible to all Indigenous people living in urban centers across the United States.

The NCUIH also works on Capitol Hill and with federal government agencies to advocate for access to culturally competent health care for urban Native Americans and Alaska Natives across the country.

Kresge: Why does the National Urban Indian Health Council focus on the health of urban American Indians and Alaska Natives?

Today, more than 70% of the Native American and Alaska Native population lives in urban areas. The movement of our population to urban areas has exposed this group to a host of infectious disease problems, and many have experienced economic instability, homelessness, unemployment, poverty, and a lack of cultural connectedness or sense of the community.

Our ancestors signed treaties with the federal government guaranteeing health care for American Indians in this country. They signed the treaties to ensure that future generations have everything they need to be healthy, and we won’t stop fighting until that happens. We envision a nation where comprehensive personal and public health services are available and accessible to all Indigenous people living in urban centers across the United States.

Kresge: What impact has the COVID-19 vaccine had on Indian country?

Crevier: At NCUIH, we take great pride in our communities when it comes to immunizations and access to these essential vaccines. The NCUIH has worked from every angle to ensure that urban Indian organizations and the Indian country as a whole have access to COVID-19 vaccines as they did not receive federal resources during the H1N1 pandemic, and fortunately our efforts have been successful.

Our Indigenous parents have the highest vaccination rate for COVID-19 and that is undoubtedly because our community has come together during this time to ensure access to the vaccine. At a time when the healthcare industry is grappling with historic labor shortages, urban Indian organizations have rolled up their sleeves and kept working harder than ever. American Indians and Alaska Natives have lost more lives to this virus than any other people and we have not begun to realize the lasting impacts this will have on our communities – whether is about the loss of language, history or community. I am proud of our urban Indian leaders. Together, we were able to advocate for unprecedented resources to fight COVID-19 and saw the biggest increase in health funding for urban Indians in more than a decade. However, some urban Indians are still being left behind as several cities do not have Urban Indian Organization health care providers due to long-standing insufficient funding for urban programs. So we still have a lot of work to do.

Kresge: How important are partnerships and collaborations in advancing health equity for American Indians and Alaska Natives in urban areas?

Crevier: We have thrived on our ongoing partnerships and they play an important role in our mission as well as the impact we have in Indian Country. Recently, at our annual conference, we honored the Kresge Foundation with our “Rising Ally” award. This award recognizes an individual or organization that has established itself as a strong collaborator in Indian Country and a promoter of health care equity for urban Native Americans and Alaska Natives.

It was important for us to publicly acknowledge and acknowledge our valued partnership with the Kresge Foundation. We really appreciate your helping us spread awareness about our work and the importance of health equity for all American Indians and Alaska Natives. Partnerships and collaborations are essential to the success of our mission, and I look forward to continued collaboration in the future.

George Clooney, U2, Gladys Knight among the next winners of the Kennedy Center