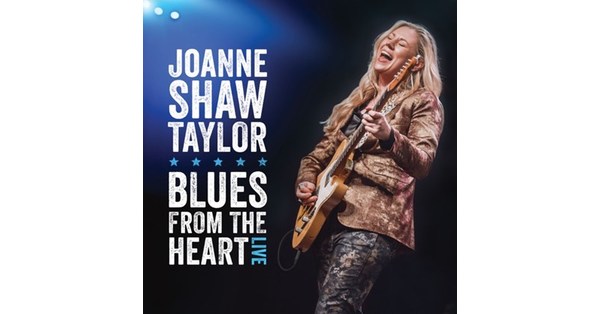 Hailed as a “monumental concert” by Guitarist, Blues From The Heart Live will be available as CD/DVD and CD/Blu-Ray, including a 24-page collectible CD booklet. Buy now HERE. Stream Album HERE. Filmed and recorded at the Franklin Theater just outside Nashville, guitarist’s magazine calls the film “an explosive outing with a lot of soul and a few guests too”. These amazing guest performances include Kenny Wayne Berger, Mike Farris and founder of KTBA and blues rock titan Joe Bonamassa.

“It was an amazing night and a show I will never forget,” Taylor shares. “I’m so proud of the film, and honored to have been joined by some of my friends for this special concert.”

The audio was produced by Bonamassa and Josh Smith at Blackbird Studios, Nashvilleand was mixed by Kevin Shirley (Led Zeppelin, Iron Maiden) at The Cave, Australia. The video component includes the bonus track “I’m No Angel” (not available on the CD) as well as a behind-the-scenes featurette which includes interviews with Joanne and Joe before they take the stage.

All Access Pass – Behind the ScenesBonus Track: I’m No Angel

Joanne Shaw Taylor was discovered by David Stewart of the Eurythmics at the age of 16 who, after seeing her play, immediately invited her on the road with her supergroup DUP – a career in music was born and in the years that followed, her incredible playing of guitar saw her build an army of applause, including jim cliff, Joe Bonamassa, Stevie Wonder and Annie Lennox.

Over the past two decades, Joanne has proven herself a prolific songwriter, releasing seven acclaimed albums to her name, each increasingly successful with her 2019 Reckless Heart entering the UK Top 20 Albums Chart and breaking into the UK Albums Chart. consolidating as one of the most important exports. in British blues-rock.