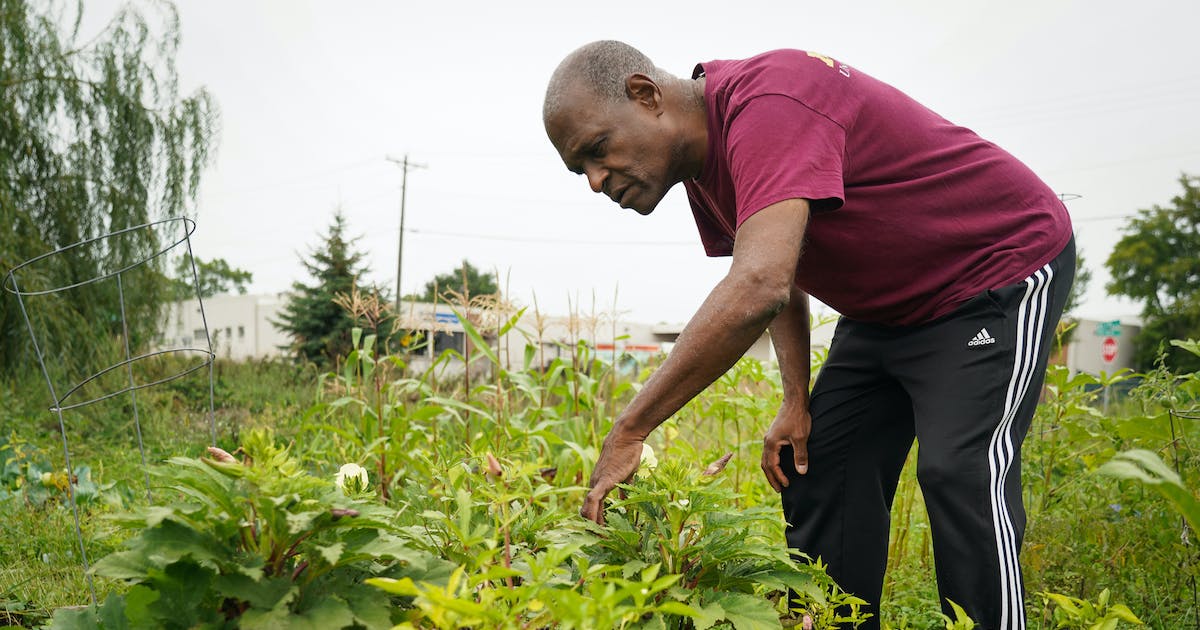 During the growing season, Patricia Ohmans and Rennie Gaither, along with dozens of volunteers, can be spotted tending to plants in three gardens that make up Frogtown Green in St. Paul.

The gardening group operates on a shoestring budget, but what it lacks in funding, the resident-led, volunteer-run environmental initiative makes up for in spirit and mission.

“One of the most important things is to respond to climate change,” Gaither said.

At its heart, Frogtown Green is an environmental effort with each garden fulfilling this mission in different ways, from combating urban drought to protecting nature’s pollinators.

To date, Frogtown Green volunteers and community partners have created a sprawling urban park, built parks and gardens, protected urban watersheds, and planted hundreds of trees. The group has also nurtured the community by sponsoring dozens of events in Frogtown. According to the Frogtown Neighborhood Association, the area that makes up Frogtown just north of Interstate 94 is bordered by Lexington Parkway to the west, I-35E to the east, University Avenue to the south, and W. Pierce Butler Road winding through Minnehaha Avenue to the north.

Frogtown Green took root in 2009 when Ohmans and other residents worked with local authorities to turn underused or unused spaces into public gardens.

“I’ve lived in Frogtown for 42 years,” said Ohmans, who nominated Frogtown Green as the winner of Star Tribune’s Beautiful Gardens competition in search of gardens that do good.

“I’m a master gardener and have a degree in public health, and all of those things have come together to try to create and maintain a healthy green space in my neighborhood.”

“Monarch City is meant to be a reminder of the need to preserve and expand habitat for pollinating insects and birds,” Ohmans said.

Throughout the spring, summer and fall, a handful of volunteers come together each week to weed, mulch and plant dead pollinators. Each fall, the Minnesota State Horticultural Society organizes a group to collect seedlings of existing plants, sort them, and distribute them to residents to store over winter and prepare them for spring planting.

To replenish the remaining wildflowers that will be needed, the West Minnehaha Recreation Center and the St. Paul Parks and Recreation Department are providing up to $700 in support annually.

The site also beautifies the busy W. Pierce Butler Road, not to mention serving as an educational tool. In the summer, children’s workshops are held weekly and a self-guided tour is offered to the public for those wishing to learn about a variety of native pollinating plants, from milkweed to stalks of blazing stars and towering sunflowers to the anise hyssop, a late- season source for bees.

“Not all pollinator-friendly plants are native to Minnesota. Survival is better for native plants because they adapt better to drought conditions,” Ohmans said.

The efforts of Monarch City Garden, which sprouted in 2016, have paid off. During the growing season, monarch butterflies and bees can be spotted daily. Additionally, 2021 brought a major breakthrough that created buzz: three confirmed sightings of the rusty-patched bumblebee, the state bee on the U.S. Fish and Wildlife Service’s endangered species list.

“It was a big deal that these bees were identified here. It shows that if you create a habitat, they will come,” Ohmans said. “I think people are starting to become more aware of plants that can thrive in Minnesota. If you want a carefree garden, you should plant a natural garden.”

It takes a village

A few blocks away, Our Village Garden sits on a half acre at W. Pierce Butler Road and Milton Avenue. The community garden came into being after the Port Authority of Saint-Paul undertook a major project to clean up the old dump. The organizers of Frogtown Green then stepped in to make it a usable space.

Today, the park includes 40 flowerbeds, walkways, a trellis and a pergola. Trees have also been planted throughout the site.

Frogtown residents sign up for a garden bed, assigned each spring on a first-come basis, and plant vegetables during the growing season. Community events such as ice cream parties, concerts and harvest bonfires are also held.

Gaither – who last summer was growing a vegetable patch of okra, kale, cabbage, tomatoes and potatoes as well as a butterfly garden like Mexican sunflowers and milkweed – said he appreciated that the gardeners at Frogtown Green come from diverse backgrounds who bring their own brand of expertise to the group.

Stop by any day during the growing season and it’s not uncommon to see Somali, Hmong, Vietnamese, Karen or Spanish-speaking gardeners tending to beds of okra, peppers, tomatoes, squash and other products.

A resident has found the right strategy and seed spacing to efficiently grow towering corn husks on a considerably small bed. Another gardener at Lily Pad Community Garden in nearby Frogtown Green uses the leaves of the artichoke he grows to make tea.

A few blocks away on Dale Street and Lafond Avenue is the Lily Pad Community Garden. The 25,000 square foot site on what was previously vacant city-owned land aims to mitigate the effects of climate change through education.

The garden features exhibits and demonstrations on how to compost, create pollinator beds, plant trees, conserve water and more.

“What we’re trying to demonstrate is that even on a budget, you can do things that make your house cooler in the summer or improve your soil for gardening so you can grow your own food or conserve the water or redirect water so your basement doesn’t get flooded,” Ohmans said. “All these small, affordable changes for households will make a difference.”

The Lily Pad also serves as a nursery where a group of Frogtown Green volunteers who call themselves the “Tree Frogs” partner with the U.S. Forest Service, AmeriCorps, Tree Trust, and neighborhood organizations to grow hundreds of fruit trees and shade each year. Volunteers then plant the trees in residents’ gardens for free. Since its creation in 2012, more than 600 trees have been planted in the Cours Saint-Paul.

“Climate change is going to hit our neighborhood harder than other neighborhoods that have more trees, more green space, and more resources,” Ohmans said.

Now, as Frogtown Green prepares for another growing season, Monarch City volunteers prepare seedlings for spring planting. Garden beds are allocated at Our Village Garden. And at the Lily Pad Community Garden, the group is making more space with a goal of planting a total of 1,000 trees by 2025.

In addition to its growing environmental mission, Frogtown Green organizers hope the fruits of their labor will resonate throughout the community in other ways.

“I think it’s a way of countering a [negative] neighborhood stereotype,” Ohmans said. “It’s the kind of thing that doesn’t always make the headlines. Frogtown is much more than meets the eye.”

The school is hosting a Broadway-themed fundraising concert for Ukraine