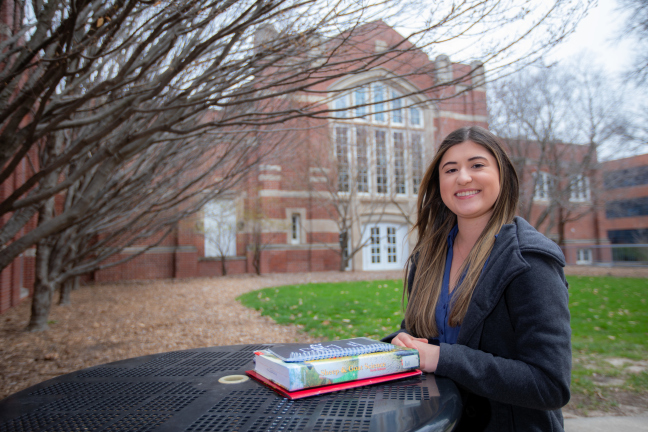 AMES, Iowa — No obstacle is too big for Valeria Miranda Ortiz.

This weekend, Miranda Ortiz will be graduating from Iowa State University with a bachelor’s degree in animal science.

As her family struggled financially, Miranda Ortiz says growing up in Puerto Rico was a “blessing”. She discovered her passion for animals as a child, watching all the animal and vet shows she could find. Her parents always wanted her to go to college, but with that came the fear of how they could afford it.

An additional obstacle: Miranda Ortiz did not speak English.

“When I decided I wanted to be a vet, I realized I wasn’t going to be able to study in Puerto Rico because we don’t have vet schools there,” she said. “I could do a baccalaureate there and then go to vet school, but I knew it was going to be even harder for me because I didn’t know English.”

Instead, she decided the best path was to jump straight into an American college and learn the language wherever she found herself. During a college orientation in Puerto Rico, Miranda Ortiz spotted the Iowa State table. She was captivated by the animal science program, the beauty of the campus and the friendliness of the staff. His decision was made.

When she received her acceptance letter, her parents cried – from happiness that she could pursue her dreams as well as worries about finances and not knowing the language. Miranda Ortiz has advanced.

A second home in the state of Iowa

After graduating from high school, Miranda Ortiz moved to Ames to begin the Academic Excellence Program (APEX), an immersive summer experience to help multicultural high school students transition to Iowa State. She has also participated in TRIO, which provides academic and career support to income-eligible and first-generation students. Miranda Ortiz says APEX has been transformational and calls TRIO staff her “second family.”

In her first freshman class, Miranda Ortiz approached her instructor — Timothy Stewart, associate professor of ecology and natural resource management — with a translator app open on her phone. She told him of her concerns about not understanding anything. He replied without judgment, “How do you learn best?

She’s a visual learner, so Stewart sketched out the terminology as he talked about it in class. He worked with her after hours in her office. He recommended that she go to a community organization for non-English speakers to learn the language. She recorded her teachers’ lectures and stayed up late listening to the recordings to learn English.

Jodi Sterle, an animal science teacher, connected Miranda Ortiz with another student who helped her with course materials. Sterle also stayed after hours with Miranda Ortiz.

“I feel like what makes a college isn’t the programs it offers, or the nicest campus it can have, it’s the faculty and staff,” Miranda Ortiz said. “These are teachers who go above and beyond.”

Miranda Ortiz realized another passion here: learning languages. She has since learned American Sign Language and Portuguese with the goal of learning as many languages ​​as possible to get to know a variety of people and help more clients in her future veterinary practice.

During spring break this year, she participated in a surgical experience in Costa Rica through the student organization Veterinarians Without Borders, during which she learned how to place catheters, intubate, sterilize and to sterilize animals. Some days she served as a surgical assistant, others as an anesthesiologist. After graduation, she will travel to Germany to learn about equestrian events, veterinary practices and professions. Miranda Ortiz emphasizes the importance of getting involved beyond the classroom.

“Iowa State offers a lot of things, but you have to apply, you have to research them,” she said. “It’s not like they’re just going to give it to you.”

The Cyclone experience won’t stop once Miranda Ortiz graduates. Recently, his sister Denise was accepted into the state of Iowa. She will be going there this fall to study clothing, merchandising and design.

Miranda Ortiz says the hardest part was being away from her family.

“Because of our financial situation, I couldn’t really travel for Thanksgiving, Spring Break, and Summer Break,” she said. “I usually only see them once a year, usually at Christmas. It gets easier over time, but you don’t get used to it.

She has been accepted into two vet schools and is currently deciding on her plan for the next four years. After that, she plans to specialize in veterinary dermatology or surgery, another two to three years.

“A lot of people ask me if I’m worried that it will take me years to finish. I always say, ‘It’s not the time that matters, it’s what you do with it. As long as you do something you love, time doesn’t matter,” she said.

Celebrate the Year of the Chicago Dance