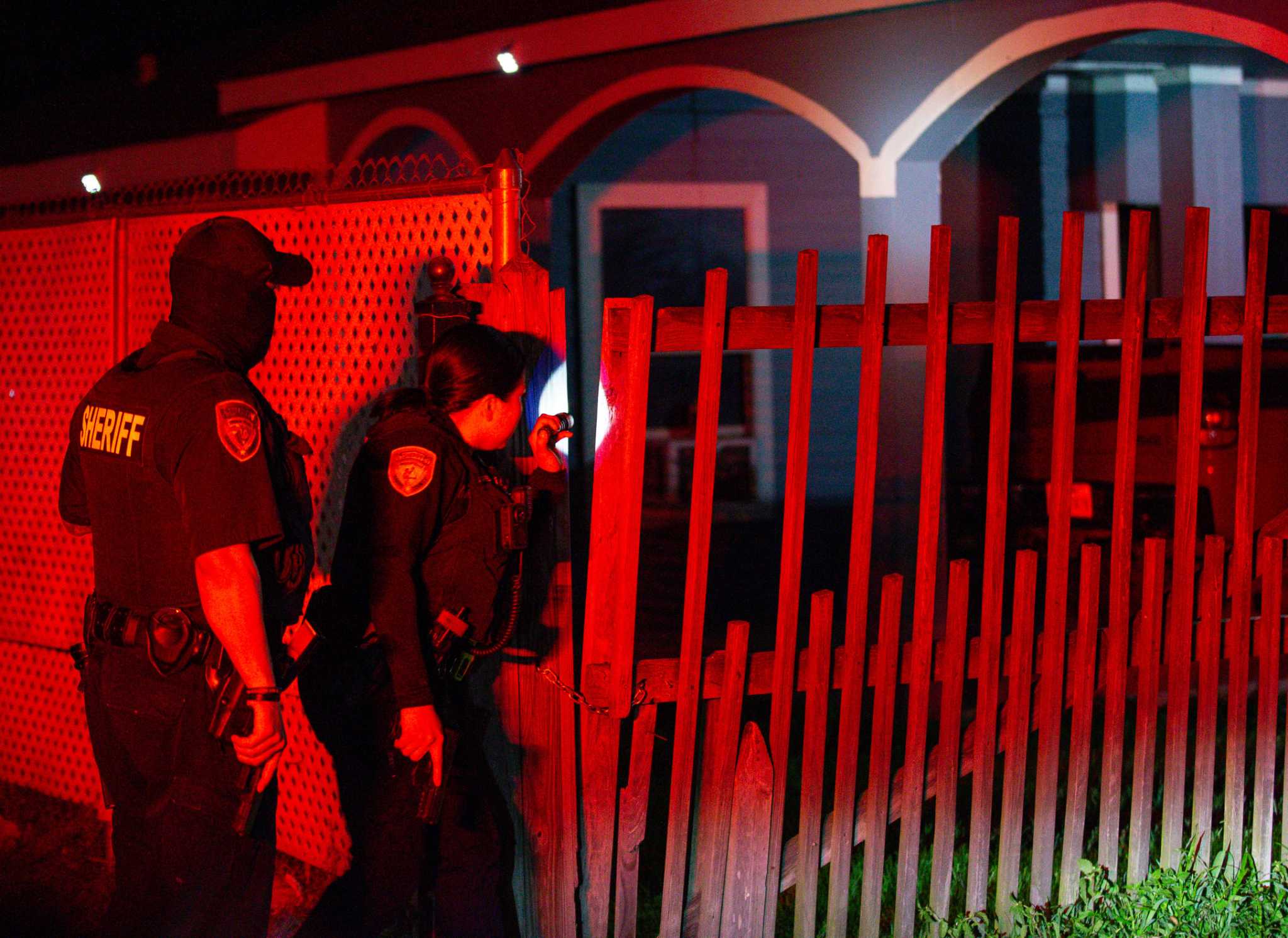 Deputy Jessica Suarez shined her flashlight on a dark intersection on Saturday night, looking for evidence of gunfire.

Ten minutes prior, someone had fired six shots on this residential street near Aldine Westfield and Little York Roads, according to a ShotSpotter alert. The Harris County Sheriff’s Department deputy drove to the designated location with lights and sirens.

At the scene, Suarez quickly found what she was looking for: two used shell casings on the ground. Meanwhile, 62-year-old resident Debra Simms came out and explained that someone had recently shot at her neighbor’s residence. She wanted to move.

“This is my childhood home here that I live in,” she said. “It’s just too dangerous to live here. People are shooting at you in your own backyard.

RELATED: Where are Aldine’s gunshots coming from? This program tries to find out.

In an effort to curb gun violence, Harris County officials last spring launched ShotSpotter, a gunshot detection system, in a 5-square-mile area in East Aldine. Although the technology has drawn criticism from community members and researchers nationwide, law enforcement officials and community leaders in this unincorporated area north of Houston say the initiative was a success.

“There’s no doubt in my mind that we’ve reached a level of reduction and prevention,” County Commissioner Adrian Garcia said. “We have made the work of our assistants much more efficient, much more surgical.”

ShotSpotter sent 2,744 alerts notifying law enforcement of a gunshot discharge and detected 13,203 gunshots in the area from late March through last April, according to county statistics.

Authorities responding to those alerts located 2,194 casings, seized 40 firearms and located 13 victims, officials said. They made 44 arrests and filed 59 charges in connection with the ShotSpotter incidents.

Garcia, a former Harris County sheriff and longtime Houston police officer, championed and funded the three-year, $780,000 contract with ShotSpotter. But he could not provide statistics showing an identifiable decrease in gun crime, saying only that his office was working to collect and analyze more data.

“We’ll see what the actual reduction is,” he said. “But at the end of the day, the only thing we’ve achieved, from what I’m hearing from citizens, is a reduction in fear of gun violence.”

Connie Esparza, a 74-year-old Aldine resident and president of her neighborhood association, said she hasn’t heard so many gunshots since ShotSpotter was implemented.

Esparza, an Aldine ISD board member, attends monthly public safety meetings to get updates on the program. She said she no longer thinks twice before leaving her house or staying outside on her patio at night.

“I’m still alert, but I’m not as scared as I used to be – because you heard (gunshots) all the time,” she said. “We are heading for improvement.

ShotSpotter confirmed what officials already suspected about the area: There are frequent gunshots and they usually go unreported. That’s why the technology is well-suited to this community, Garcia said.

People generally do not call the police because they may face a language barrier, have concerns about their immigration status or fear retaliation from armed neighbours, he said.

“Technology takes all of that out of the equation,” Garcia said. “Technology empowers law enforcement to address neighborhood issues and shows the community that law enforcement is actually working on their behalf on those same issues of concern.”

ShotSpotter is one tool in a larger crime-fighting strategy, Sheriff Ed Gonzalez said. This deters people from shooting guns and helps deputies respond more quickly to recover evidence, make arrests or find potential victims. When calls went unanswered before ShotSpotter, it created a culture where gunshots became acceptable, he said.

“We wanted to send a message that this is unacceptable,” the sheriff said.

Data provided by Garcia’s office shows a significant disparity between the number of unloaded firearm-related service calls and the number of ShotSpotter alerts.

In ShotSpotter areas, residents called police to report a discharge of gunshots 74 times in the first eight months of the program’s launch. Meanwhile, over the same period, ShotSpotter sent 1,426 alerts, sending law enforcement to nearly twenty times as many incidents as callers reported.

According to the data, residents living in ShotSpotter areas called the police more often before the technology was implemented.

ShotSpotter installs a network of acoustic sensors that triangulate the sound of gunshots and send an alert to local authorities after a brief review process at company headquarters. The company claims the technology is 97% accurate at detecting gunshots.

But the system has generated significant controversy locally and nationally.

Earlier this year, the Houston City Council decided to continue using ShotSpotter despite objections from some council members, activists and residents about its effectiveness.

In January, police responded to a ShotSpotter alert on Houston’s South Side. They searched the premises and left without finding anything, according to a Statement from Chef Troy Finneralthough a 4-year-old girl was shot in an apartment.

Nowhere has the backlash against technology been more apparent than in Chicago, where police respond to a ShotSpotter alert last spring, shot and killed 13-year-old Adam Toledo.

the The MacArthur Justice Center at Northwestern University School of Law studied ShotSpotter and found that an overwhelming majority of alerts do nothing. There is no independent scientific evidence showing that it can reliably distinguish between gunshots and other loud noises, the center found. Instead, according to the report, it creates unnecessary and potentially volatile encounters between residents and police.

A Chicago Inspector General’s Office report released last August came to similar conclusions about the effectiveness of ShotSpotter. The bureau analyzed more than a year of data and found that ShotSpotter alerts “rarely yield documented evidence of gun crime,” according to the report.

While officials say they’re happy with ShotSpotter, pointing to anecdotal evidence of a drop in shootings and law enforcement support, there’s no doubt that gunshots remain a problem in Aldine.

Suarez began his night shift by responding to a mobile home community near Airline Drive where two mothers with children reported that bullets had exploded in their homes.

The location was outside ShotSpotter’s coverage area and calls were given a lower priority as residents reported no injuries or information about the shooter. If the call had gone through a ShotSpotter alert, Suarez said, she could have responded more quickly to a more precise location and possibly apprehended the shooter.

Suarez approached a trailer and tapped on the window with her flashlight. Inside, Yazmin Jezabel handed Suarez a plastic bag containing a ball.

The mother said she was bending down to put the groceries in the fridge when the bullet flew inches from her head. He made a hole in the ceiling and left a gash in the floor.

Her 7-year-old daughter was watching TV and eating Cheetos on the couch a few feet away.

It was a serious and frightening situation, said Jezebel, which makes her family feel like they are not even safe at home.

Suarez, who has five children, collected the evidence and wrote a report.

“It’s sad,” she said. “That’s what attracts me. There are so many children in these residences that it could easily have hit them.

Nearby, another call was waiting: Twenty shots fired at a children’s birthday party.