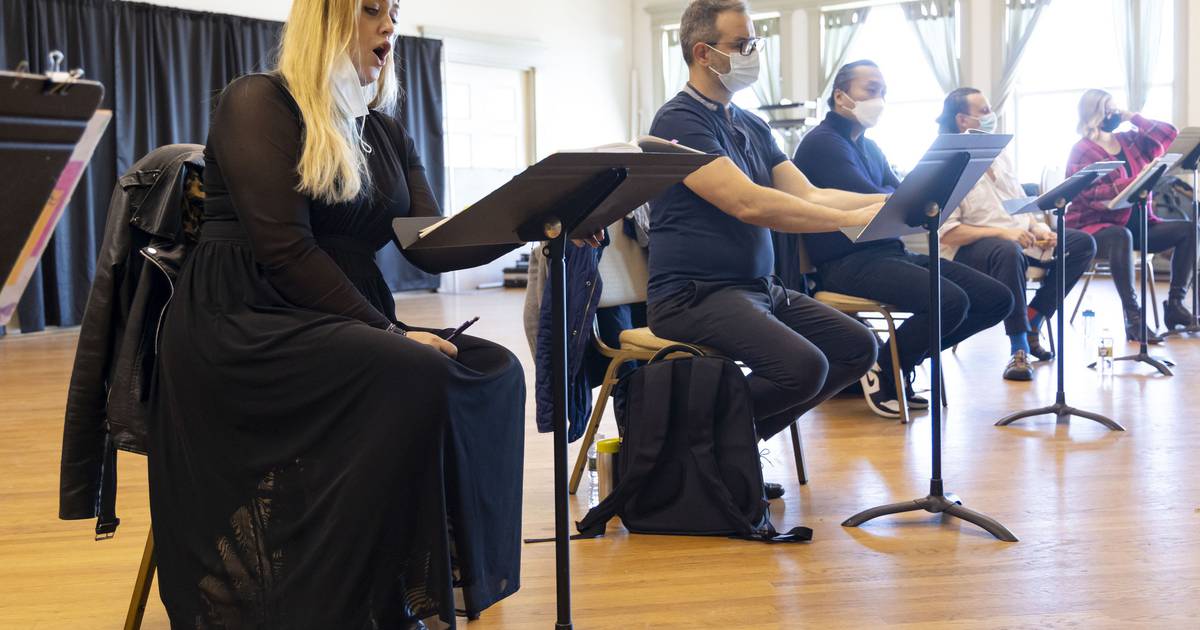 Like so many performers during the COVID-19 lockdown, Lidiya Yankovskaya fantasized about how her company, the Chicago Opera Theater, would emerge from the pandemic.

“The plan was to come out of the pandemic with something big that took advantage of the things that only live music can offer,” she says.

This wish culminates on November 18 and 20 with COT’s local premiere of “King Roger”, composed in 1924 by Karol Szymanowski to a libretto by his cousin, Jarosław Iwaszkiewicz (whose literary pseudonym was Eleuter). The opera is based on the true story of King Roger II, who ruled Sicily and North Africa from 1105 to 1130 and is remembered for his religious, racial and linguistic tolerance in the lands of his rule. .

“King Roger” has rarely been performed in the United States. Her first stumbling block is the forces needed to perform it – the same thing that attracted Yankovskaya to opera in the first place. COT’s performance features a massive choir of more than 120 Chicago-area singers, anchored by chamber choristers from Together Readthe Polish performing arts company from Chicago.

“King Roger” also requires all of these performers to sing in Polish – a tall order for a language that is almost sidelined in opera pedagogy.

In addition to the backing vocalists from Lira, two Polish singers headline the COT production: baritone Mariusz Godlewski (King Roger) and soprano Iwona Sobotka (Queen Roxana). Like everyone else, luckily COT has a talented coach in Assistant Conductor Michael Pecak, who grew up in a Polish-speaking family on the North West Side and has led Polish diction workshops at other music broadcasters. To help non-Polish performers, Pecak recorded himself saying the entire libretto, created a full English translation, and sent a phonetic guide for the piece.

“Polish is known for its dense consonant clusters, which are unlike anything we have in English,” Pecak said. “I approach (training Polish) the same way as when I train the more standard classical operatic languages ​​like Italian or French. But it’s one thing to know how to pronounce the words, and it’s It’s quite another to sing them.

“I’ve heard ‘King Roger’ in concert before, in Poland, and I’d say it’s a medium-difficult piece. But it’s very difficult if you don’t speak Polish,” she said.

A third possible reason for the long-standing neglect of “King Roger” here may be the homoerotic undercurrents in the story of Szymanowski and Iwaszkiewicz. Both Szymanowski and Iwaszkiewicz left traces of their attraction to men; the former was apparently inspired to stage his next opera in medieval Sicily after his own travels across the Mediterranean, which marked a turning point in embracing his own sexuality. In their retelling of the story of King Roger, the monarch’s openness is tested by the arrival of a charismatic young shepherd who ideologically seduces him into paganism.

Some stagings emphasize this subtext more than others. When speaking to the Tribune, tenor Tyrone Chambers II – a COT regular singing as Shepherd for this month’s production – had just returned from a ‘King Roger’ production in Cottbus, Germany, in which the sexual tension between the two characters had been played out thoroughly.

Chambers said he planned a more elliptical rendition for the COT production, allowing the audience to come to their own conclusions about the nature of the Shepherd’s relationship with King Roger.

“I hope what (audiences) will see is a closeness between men that is possible without sex – the kind of intimacy that women are allowed to have, and that men in some cultures still have, but that we don’t see in Western settings,” he said.

Adding yet another layer, director Dylan Evans and artist Edward Cabral’s semi-stage concept is full of Greco-Roman allusions, particularly the duality between Apollonian austerity (represented by King Roger and his court) and Dionysian sensuality (embodied by the shepherd). Cabral’s original masks for the production are inspired by murals found in the ruins of Pompeii.

“A lot of my work is neoclassical, and we’re both big fans of ancient history,” said Cabral, who is also married to Wells. “We’ve been together for eight years, and I think this is our fourth collaboration together. It’s not our first run around the block.

Nor is it that of Lira Ensemble. Founded in 1965 and officially incorporated in 1976, Lira is not only the only American performing arts company specializing in Polish arts and dance, it is possibly the oldest ethnic arts organization in the Midwest.

Whenever the classical Chicago mainstream has elevated Polish composers and music, Lira has, without fail, been a rallying force behind the scenes. Migala recalls that the Poles of Chicago invaded the Orchestra Hall by the hundreds in 1983 to hear Witold Lutosławski’s first Symphony No. 3, now considered one of the seminal symphonies of the 20th century. At an after-show party hosted by Lira, Lutosławski was evidently touched by the enthusiastic reception.

“At one point he was still sitting there at 3 a.m. I said, ‘Maestro, aren’t you tired?’ He said, ‘No, I’m not tired. I am in paradise. I have all the energy in the world, because of what happened here in Chicago,” recalls Migala.

“It was a day I will never forget. And I don’t think he forgot it until the day he died.

COT and Lira expect an equally enthusiastic presentation at these performances, the belated Chicago premiere of “King Roger.” The production’s coincidence with Poland’s Independence Day on November 11, as well as COT’s upcoming 50th anniversary, only stalls.

Hannah Edgar is a freelance writer.

The Rubin Institute for Music Criticism helps fund our coverage of classical music. The Chicago Tribune maintains editorial control over assignments and content.