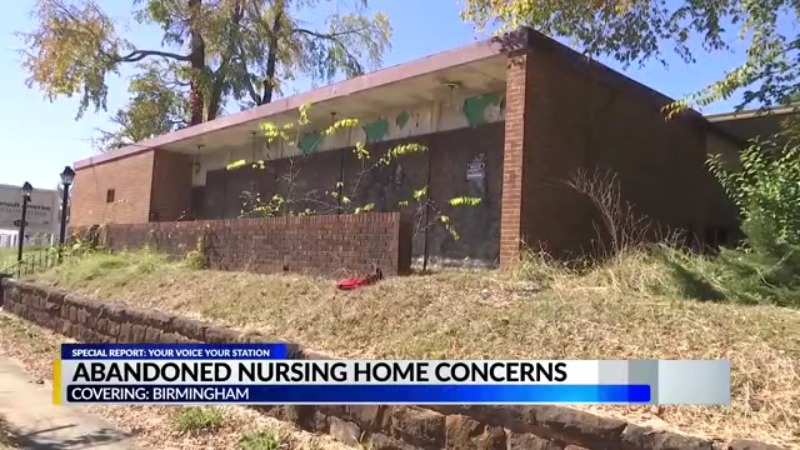 BIRMINGHAM, Alabama (WIAT) — A Birmingham woman thinks an abandoned building in her neighborhood is becoming a hotspot for litter and crime.

After several failed attempts to get help from the city and the police, she decided to call CBS 42’s Your Voice, Your Station team to find out what’s stopping city leaders from fixing it.

‘I just want to know where he is’: Bessemer’s mother asks for information on her missing son

The Consult America Health and Rehab building is on the corner of 71st Place North and 1st Avenue North in the Wahouma area.

“It’s sad. It’s really sad and no one should have to live like this,” said Dr Annette Smith.

Dr. Annette Smith moved to the neighborhood a year ago from Florida.

“I have family members who want to come visit but I don’t recommend it,” Smith said.

The abandoned assisted living home has been vacant for years and neighbors said it has become a hotspot for crime and litter.

“Wherever you go in Birmingham you see a lot of empty buildings, a lot of vacant buildings and for me that’s the cause of a lot of crime in the area,” Smith said.

She wanted to live closer to her children and grandchildren, but she didn’t expect to live next door.

Smith said over the past year she has made several calls to city leaders.

CBS 42’s Carly Laing did some research to find out what can be done. The property is privately owned, so the city is not responsible for its upkeep or demolition. She contacted District 5 Councilman Darrell O’Quinn and he said the city was working to resolve the issue.

“We are certainly aware of that. Code enforcement action has been taken on this property,” O’Quinn said.

According to O’Quinn, state laws make it very difficult to deal with private property situations like this. He said the city needed to find and notify the owner of the safety issues. The owner then has the opportunity to remedy the problem.

If the owner does not take action, the case can be taken to court. O’Quinn said the landlord usually has another chance to fix the problem before the court makes a final decision. However, the process must restart if the building changes ownership.

According to tax documents, property taxes for the land have been paid by at least four different entities over the past 10 years

“Alabama is a strong state when it comes to property rights. The preference in the laws here is to give property owners a lot of protections,” O’Quinn said.

O’Quinn said he is committed to making this area cleaner and safer.

“We don’t want the burn to exist anywhere. We helped make investments in the Wahouma neighborhood where this property is located. We’re trying to take steps to address this issue, but again, Alabama is a strong state when it comes to property rights,” O’Quinn said.

After our interviews, a fire broke out in the building earlier this week and spread to a neighboring house.

“Not only is the building on fire, but it has set fire to the neighboring house and damaged two other houses. It’s something the city needs to take seriously,” Walker said.

Walker said it’s not the first time a fire has broken out. He said fires in abandoned buildings in this area happen far too often.

We were able to locate the last known owner of this property. Laing has contacted them but has yet to hear back.

Stick with CBS 42 as this story develops.