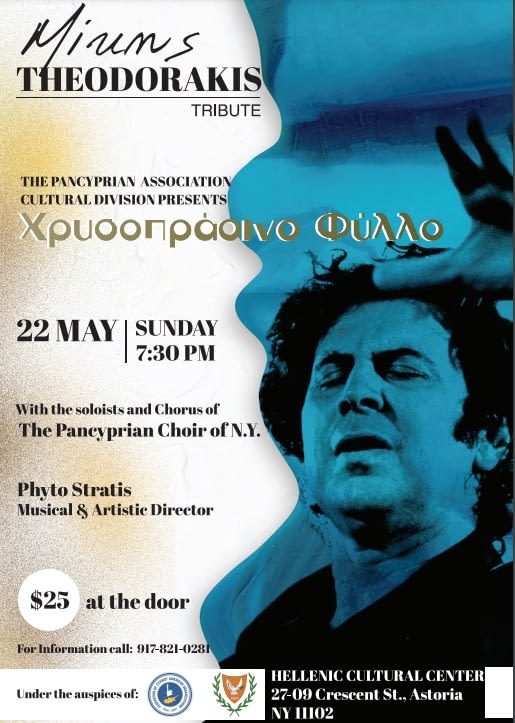 ASTORIA – The Cultural Division of the Pancyprian Association presents the Pancyprian Choir of New York and its soloists with artistic and musical director Phyto Stratis in the annual family spring concert, A Tribute to Mikis Theodorakis- Xrysoprasino Fyllo – Gold Green Leaf, the Sunday, May 22, 7:30 p.m. at the Hellenic Cultural Center, 27-09 Crescent Street in Astoria.

Featuring beloved classics by the late legendary Greek composer, the event is held under the auspices of the Federation of American Cypriot Organizations and the Consulate General of the Republic of Cyprus in New York.

Originally scheduled in honor of Theodorakis’ 95th birthday in 2020, the concert was postponed due to the pandemic, although rehearsals continued throughout the lockdown via Zoom. Once in-person rehearsals were able to resume, the choir began preparations for their annual Christmas concert which was held to great acclaim at St. Catherine and St. George’s Church on December 18. The choir then resumed rehearsals for the tribute concert to Theodorakis. than the annual commemoration of EOKA which took place on April 3rd.

Audience members can look forward to another moving concert by the Choir and its talented soloists on May 22. Songs on the program include Tis Dikeosinis, Ena to Helidoni and, of course, Xrysoprasino Fyllo- Gold Green Leaf.

Theodorakis is perhaps best known for his scores for the Oscar-winning films Zorba the Greek (1964) and Z (1969), as well as the Oscar-nominated Serpico (1973). He died aged 96 on September 2, 2021. Theodorakis was among those memorialized in In Memoriam at the 94th Academy Awards on March 27.

Tickets for the tribute concert on May 22 are $25 available at the door.