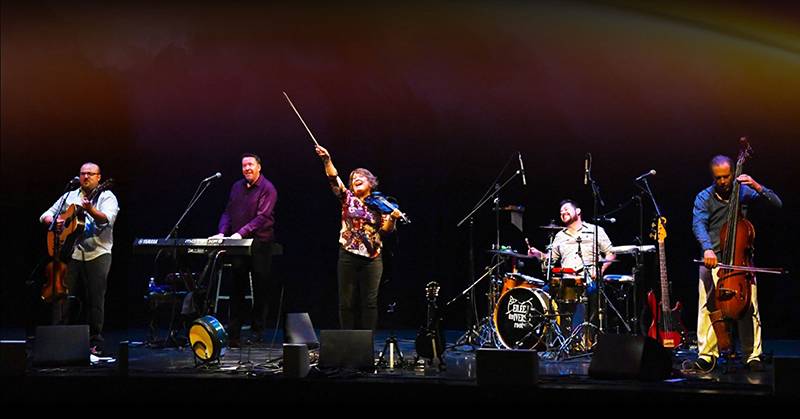 The SOCORRO–Eileen Ivers biography reads like her own Who’s Who of Irish/folk music: nine fiddle tracks from all over Ireland and a 10th on the tenor banjo; more than 30 championship medals, making her one of the most awarded people to ever compete in these prestigious competitions. Additionally, she has a Grammy Award and was nominated for an Emmy.

And in another blockbuster coup for New Mexico Tech, the performing arts series booked this incredible musician for one of the first shows on its “Scatter the Light Tour.” Eileen Ivers and her ensemble will perform at the Macey Center at 7:30 p.m. on Friday, February 25.

“At PAS, we are always trying to schedule a Celtic band for the season,” said Ronna Kalish, Director. “We’re thrilled to be able to bring this incredible artist and her band to Socorro on a statewide tour of New Mexico and, yes, there will be dance space available.”

A special treat is a pre-show Lucky Irish social hour featuring Bangers & Mash with bread soda for $10, plus a special Irish drink at the cash bar. The event will be completed with an Irish dancing demonstration and you can optionally learn how to dance an Irish jig if you wish. Advance tickets and/or rsvp are required and can be purchased at nmt.edu/pas.

The daughter of Irish immigrants, Eileen Ivers was born and raised in the Bronx, NY By age 8, Ivers was already heavily involved in the fiddle; at the age of 9, she won her first All-Ireland medal for playing the banjo.

She was ‘discovered’ and mentored by Martin Mulvihill, a native of Limerick, Ireland, who never competed or performed for large audiences, but instead sought out young talent to nurture. At the age of 12 she had her first recording and was also playing in a Ceilidh band called Erin Og.

Coming from a culturally diverse community, Ivers immersed herself in the different genres of music she experienced growing up. After college, Ivers started playing in Irish pubs and then on the festival circuit, where she met and played with well-known musicians such as Seamus Egan and Mick Moloney.

While gaining recognition for various gigs as well as for his band, Cherish the Ladies, Ivers soon collaborated with various artists, including Daryl Hall and John Oates, who featured on Hall & Oates’ 1990 album “Change of Season”. Three months after the album’s release, Ivers joined Hall & Oates for a year-long tour of Europe, Australia and Japan.

Back in New York, Ivers worked with other notables, such as John Doyle and Kimati Dinizulu, whose backgrounds in the African-American tradition blended surprisingly well with Ivers’ Irish fiddling. Playing a mix of Irish and African music, the two became regulars at Paddy Reilly’s Manhattan bar on Monday nights. Ivers continued to experiment and expand the definition of Irish music playing with Paddy A Go Go, a Celtic/hip-hop/rap group.

Among her credits is the international success Riverdance, where she was the violinist. His recording credits include over 80 contemporary and traditional albums and numerous film scores. She has been called “sensational” by Billboard magazine and “the Jimi Hendrix of the violin” by The New York Times. “She electrifies the crowd with a dazzling display of virtuoso playing,” says The Irish Times.

“Perhaps it was the mathematical mind coupled with her passion for finding parallels in certain traditional styles of music that contributed to what became Eileen’s signature sound: a beautiful and exciting mix clearly rooted in the Irish traditional music that embraces African, Latin and American rhythms roots the music in a natural way,” says World Music Central.

Ivers and his ensemble head prestigious performing arts centers, guest perform with numerous symphonies, perform at major festivals around the world, and have appeared on national and international television. The LA Times proclaims, “Ivers’ presentation was music with the kind of life and spirit that come together when talented artists from different backgrounds find the ties that bind all forms of music…no wonder the audience was loved every minute.”

Ivers will change the way you think about the violin, she promises. The concert at NM Tech is sponsored by Bob and Kathy Markwell, Jon Morrison and NM Tech Student Government Association. Tickets for the PAS party are available online. For more information, visit their website nmt.edu/pas, call 575-835-5688, or email [email protected]