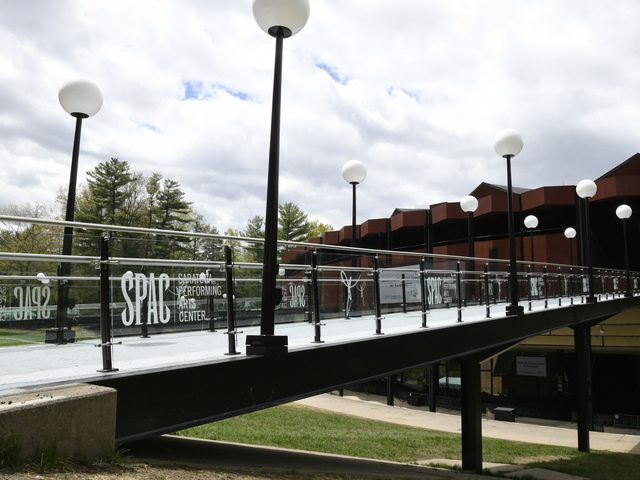 Ahead of the venue’s first full season since 2019, executives at the Saratoga Performing Arts Center announced facility upgrades, including a new dance floor and sound system, at an annual meeting Thursday.

Much-needed updates have taken decades to prepare. The dance floor replaces one the New York City Ballet has used for several decades, and the sound system replaces equipment that dates back to the 1990s. PSPC also purchased 150 new desks and chairs, which it had to borrow from a school community for the past 55 years whenever the Philadelphia Orchestra came to perform.

An assistive listening system has also been installed to improve accessibility, and renovations are underway behind the scenes to modernize dressing rooms and workspaces for artists and crew members.

The improvements come as PSPC prepares for what President and CEO Elizabeth Sobol notes as “the most significant and ambitious season PSPC has delivered in decades.”

Its resident companies, including the New York City Ballet, the Philadelphia Orchestra and the Lincoln Center Chamber Music Society, are set to return with full productions and residencies. Freihofer’s Saratoga Jazz Festival, along with Caffè Lena @ SPAC and a lineup of popular concerts presented by Live Nation, will also be returning.

“Like so many individuals and organizations, the past two years have challenged us, but they have also called upon our deeper wells of creativity, compassion, resilience and imagination. Whereas now, in the summer of 2022, in a full return of a renewed and rejuvenated SPAC, we are like the endangered Karner blue butterflies of our region – reappearing beautiful and glorious after being cocooned for so long,” Sobol said.

During Thursday’s meeting, Sobol also discussed SPAC’s financial situation, noting that the organization ended 2021 with $4 million in operating reserves and was able to return to pre-pandemic staffing levels. .

“This unprecedented situation has allowed SPAC for the first time to restore and renew itself in all of its operations, including reinvestment in its resident companies,” Sobol said.

The organization’s total operating income for 2021 was $10.14 million and its total operating expenses were $5.92 million. The surplus was attributed to a reduction in programming expenses due to the COVID-19 pandemic, as well as fundraising efforts and the closed site operators grant and paycheck protection program.

Two million of the surplus has been committed for capital improvements and operational needs, while the remaining $2 million will be used to establish what PSPC calls a fund for the future. It will support the classical companies that PSPC presents, as well as arts education programs. It will also help offset rising costs associated with supplies and equipment and its annual shortfall on the four-week classic amphitheater residencies, which regularly exceeds $2 million and is expected to be higher this year.

“Growing the Future Fund will be one aspect of our long-term strategic planning,” Sobol said. “Today, however, we are taking the first step to simply and boldly reaffirm our commitment to our flagship programming – and to what has become our most important work in the community – arts education.”

PSPC has expanded its education program in recent years to serve 50,000 students per year. This season, the Adirondack Trust Company’s Young Artists Festival returns on June 5 with a celebration of more than 500 dancers, musicians, singers, poets and visual artists from across the Capital Region. Throughout the summer, there will also be NYCB workshops and the Classical Kids program, which offers two free tickets per family. Summer Nights at SPAC, which serves Schenectady families, will return with five free events.

Here is an overview of the dates for the 2022 season of PSPC: