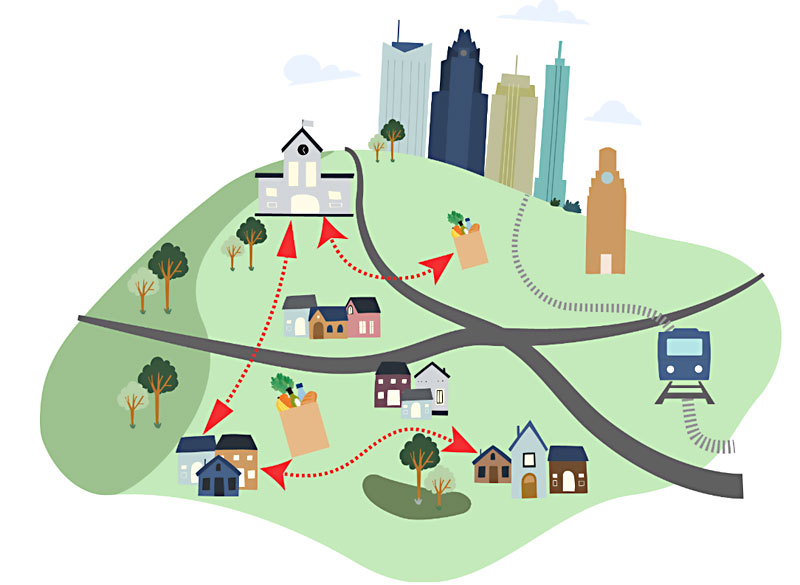 Public notice: Mobility for all: Three visions for the future of our transportation – News

As Connect Project moves from a transit map to a transit system, it becomes increasingly clear that, in and of itself, its reach is limited: unless you live, work, and shop a few blocks away. a train station won’t work much for you, until someone fixes the “last mile” issues. And even then, as the city gets bigger, if we get half the people out of their cars, but the population doubles, don’t we still have just as many gas guzzlers on the road? It’s hard to get a head start, but various people are trying. Here are three different visions that have been released over the past week, ranging from fairly conventional to those that call for disruptive change.

When City Council received its quarterly equity plan update this week, the focus was on Transport electrification, one of the initiative’s five goals (along with consumption of goods, transportation and land use, natural systems, and sustainable buildings). The report highlights some successes and sets out three goals to be achieved by 2030:

• 40% of vehicle miles in Austin are expected to be electric, with “culturally, geographically and economically diverse ownership.”

• We should have enough carrying capacity – again, “evenly distributed” across the city – to accommodate all of this travel.

• The Austin-Round Rock-San Marcos area is leading in the electrification of transportation, politics and technology, “supporting industry growth.”

The focus here is therefore primarily on encouraging the ownership of electric vehicles. As one presentation slide says, “Not driving a car is the best option to fight climate change, but cars are somewhat necessary in Austin right now.” For its part, the Austin Department of Transportation notes that it is adding 330 electric vehicles to the city’s fleet by the end of this year, and “due to rising gas prices, savings costs to date are ahead of initial forecasts”. Capital Metro is also electrifying (read more) and will be 100% electric by 2035. As for individuals, the report praises the merits of the city EV Buyer’s Guide, the developing charging network and electric bicycles, and notes that the market is trending towards electric vehicles. See the report on
austintexas.gov/page/austin-
plan-climate-equity.

This transversal city project aims to update the city’s staff Urban trail, Curband Bike packages. And after a year of community input, Public Works and ATD are presenting three scenarios for the future (see illustrations below), seeking additional input on these and other policy issues during a virtual open house. and a 15 minute survey until October 23. These include the Shared streets concept – which was already successfully tested a year ago, so what are we waiting for? How about asking each neighborhood association to nominate a likely prospect or three? – but also some striking concepts, such as a “Basic Guaranteed Mobility” program for low-income residents and other ideas for subsidizing public transit – which is taken here to include e-bikes, scooters, etc. See on austintexas.gov/department/atx-walk-bike-roll.

If you read that last paragraph thinking, “Why are we still talking about this instead of doing it?” then maybe the Institute for Community MicroMobility is for you. He also released a new report, and although the combination of transport options in their Alternative low-emission network frankly doesn’t seem much different than in the city (they have low-speed electric vehicles or street-legal golf carts) their sense of urgency is on a different level: we gotta do this shit nowand in particular, we must start collecting land and financing it now. Their new product is “a white paper written for the next mayor of Austin”, whoever he is, outlining the vision: “What if we took this huge construction boom and used it to integrate low- cost and low speed? Small public transport in our transportation system? They would, for example, dedicate “light trails” along all new rail and rapid transit lines as well as some existing routes (360 loop, the red line) and require the same type of commitment from land and money from new developments, public and private. micromobilityinstitute.org.

Scenario 3: Connecting to destinations across the city (Courtesy of ATX Walk Bike Roll)

Send gossip, dirt, innuendo, rumors and other useful information to nbarbaro at austinchronicle.com.

Do you have something to say ? The the Chronicle welcomes opinion pieces on any topic from the community. Submit yours now at austinchronicle.com/opinion.

Students play roles behind the scenes of Homecoming | Nebraska today