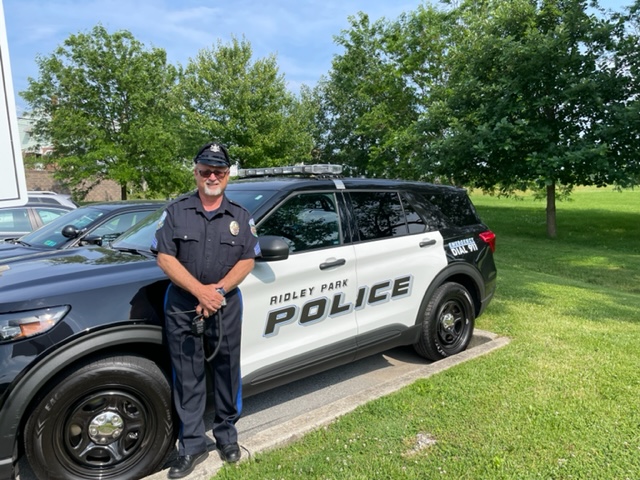 RIDLEY PARK – Sirens sounded at Ridley Park on Thursday, June 2, as the Ridley Park Police Department and an entourage of police and fire vehicles escorted Sgt. Jim Nasella at home on his last day in uniform.

As the police sergeant was led through the city by police officers and firefighters from various towns in Sector 5, the small motorcade passed through the borough so that residents could send their retirement wishes to the well-respected and appreciated police officer. His family, friends and neighbors lined the street waiting to welcome Nasella home and greet, honor and congratulate him. Afterwards, a small party was held at his home, where many officers from other municipalities joined in celebration.

In July 2021, Nasella was struck and seriously injured by a drunk driver, after coming to the aid of another motorist who was stopped with a disabled vehicle on East Chester Pike. As a result of the serious injuries he sustained from the incident, Nasella had to retire.

Ridley Park Police Chief Robert Frazier said, “Sgt. Nasella is what Ridley Park is: great people and a great community. His work ethic and dedication to protecting and serving the residents of Ridley Park and surrounding communities made him an excellent officer. He has helped so many teenagers, probably thousands, through his talks about the dangers of drugs and why to avoid them. He has also helped so many new mothers and pregnant women by showing them how to install their child safety seats. His love of his job showed through his many shifts. He often missed holidays, a family member’s birthday or other important events to come to work. Jim would come to work with a cold or sore foot or hand. He knew and took pride in doing his job, wearing his badge proudly and knowing that by working on the streets he could help someone or another officer along the way. sergeant. Nasella will be missed, but advice is just a phone call away. He has guided me throughout my career. He is truly what Ridley Park and Delaware County law enforcement stand for: honor, integrity, and hard work.

The Delaware County Veterans Memorial Association will hold a Flag Day Ceremony and announce the 2022 Medal of Freedom winners. 10 a.m. Tuesday, June 14 at the Memorial, 4599 West Chester Pike, Newtown Square. The event will celebrate the nation’s flag and honor local veterans for extraordinary service to our country

The event will begin with the national anthem, followed by a performance of “You’re a Grand Ole Flag” sung by Garret Williamson’s kindergarten class. Jon Schaffer of Flight Entertainment will present the Memorial with a check from proceeds raised over the winter months at the Delaware County Veterans Memorial Rink in Edgemont Township.
After the check is presented, the 2022 Medal of Freedom winners will be announced. A flag removal ceremony presented by Comcast will follow at 11 a.m. This event is free and open to the public.

The Springfield Athletic Association held its annual Memorial Day March on May 30. It was the 26th year in a row that deceased former members of the organization have been honored by more than 60 people who have walked a mile in their honor. State Representative Jennifer O’Mara, D-165 of Springfield, joined the group that made the one-mile drive from Halderman Field to Springfield High School.

Along this stretch, signs with the names of the honorees were posted for all to see and remember all the great things they accomplished during their years of service to the organization. The names included former managers, coaches, players and parents who supported their children on the courts and gymnasiums of Springfield.

The walk began with a brief overview of the walk’s mission by Bill McMenamin, followed by a prayer said by Kevin Adam, and then the reading of all the honored names by Kevin McCormick. This year’s walk was also highlighted with all walkers honoring outstanding current members of the organization, Steve and Patti Tirney who greeted all walkers from their porch on Kerr Lane. Steve, an outstanding coach and SAA member is recovering from major surgery. He and his wife continue to be important to the organization and the community and everyone who walks made sure to recognize them along the way.
According to a press release about the event, “People like SAA President Joe Johnson, Ed Crandley and Mike and Matthew Cosgrove should be credited for all their hard work in making this such an important event to reassure families. lost people, that they will always be remembered and will certainly never be forgotten.

Everyone is invited to the Chester Hoodcreek Classic, the annual canoe race and community gathering to highlight the importance of Chester’s waterways and wildlife, 1 p.m. on Saturday, June 11, at 114 W. 5th St., Chester , directly across from the post office ( driveway directly across from the post office. Sponsored by the MJ Freed Theatre, Crash Boys International and the Overtown Arts Alliance, the event will include the run, a community discussion, an exhibition of art, music, canoeing/water safety lessons, food, and a guided tour of historic Chester Creek by local historians.

Unfortunately, many residents of the local community rarely have the opportunity to explore the environment safely, especially the various ways to enjoy shared rivers, streams and streams. The goal of the event is to teach the importance and value of community waterways, while sharing a passion for the environment. For more information, email [email protected]

Author Robert Boyce from Wallingford will be at Barnes and Noble, 1991 Sproul Road, Broomall, from 6-8pm on Friday June 17, to sign copies of his novel ‘Kettle of Tears’.

According to Boyce, the 400-page fiction book “has plenty of gunplay, two love stories, wild animal drama, and the most evil villains readers can imagine.”

Boyce said the Western novel, which will be available at the event or via http://amazon.com, would make an ideal Father’s Day gift.