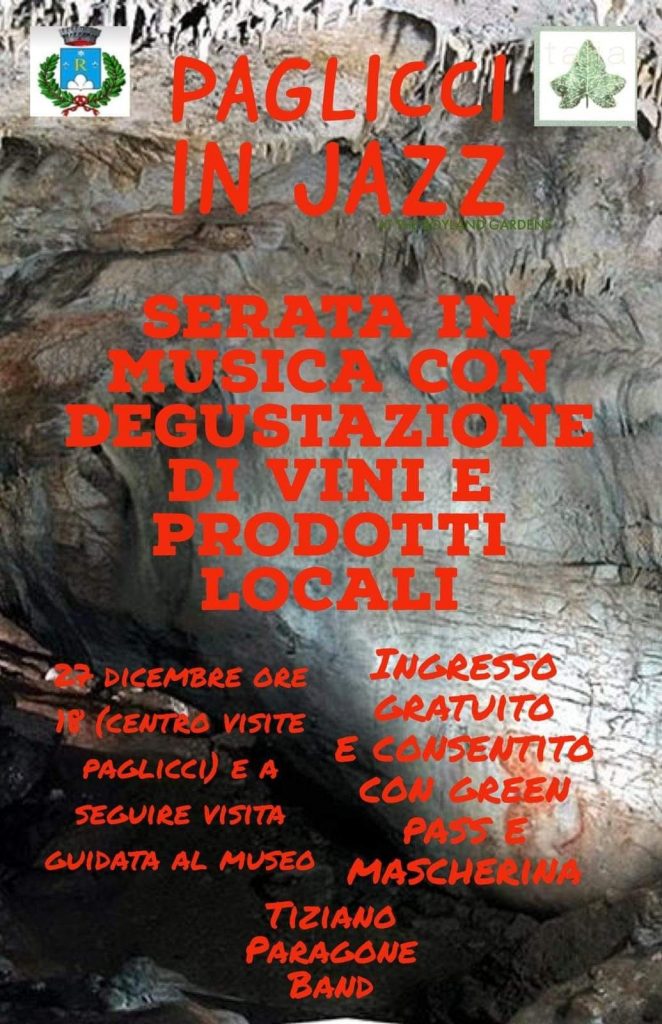 The famous Paleolithic site of Grotta Paglicci in Rignano Garganico is once again in the spotlight. It will be December 27, 2021, from 6:00 p.m., with an evening dedicated to Jazz music and food and wine. Musician and surgeon Tiziano Paragone will speak with his band, The Bulles Note.

The public administration and the Talia association organized the event. This time, the visit will take place entirely in a Jazz version, a music that attracts you and makes you better savor the history. In fact Prehistory, which invites you to visit the Visitor Center – laboratory.

The pupils of the Capitanata and National schools stopped there for many years, enchanted by the films and especially by the lighting of the fire (laboratory directed by Enzo Pazienza from the Paglicci Study Center). After this coveted place, the visitor can go to the museum, located in the old town hall of Corso Giannone, to enjoy live the various finds that cover a period of time that occupies the entire Paleolithic.

Viewing will be made possible with the help of special films and light shows, accompanied from time to time by speeches in the most popular European languages. All this was implemented at the time by the architect Stefano del Pozzo under the scientific direction of Annamaria Tunzi of the Archaeological Superintendence of Puglia. Obviously, Talia, a specially appointed association headed by the active president, Maria Grazia Urbano, will provide special guides. In addition, the public can truly enjoy an evening of music with a tasting of wines and openly local products. Entrance is free and authorized with a green pass and a mask.

The event is proposed by the municipal administration, led by Mayor Luigi Di Fiore, firmly determined, together with the managing association, to build an archaic prehistoric site of international renown, but still little known among us, as the old man says. Latin adage. . : “Nemo propheta in patria est” This is due to its thousands of finds, which include, in addition to a myriad of lithic tools, the remains of unique flora and fauna, such as the oats from 32,000 years ago, the ‘Elephans primigenius (Uro), etc., but especially the complete skeletons of two human Cro-Magnon subjects, the 12-year-old boy from about 26,000 years ago and the 3,000-year-old woman. He also has the reconstruction of the face, carried out with the DNA method by the academic Mallegni of the University of Pisa. An image, this one, not very different from that of the current Mediterranean woman.

There is also art, such as the red ocher painting of horses on a cave wall endorsed by two hands, considered the most archaic of Italian painting as a whole. It concludes the series of graffiti on stone and rock and those on movable objects made of movable bones and slabs, considered unique and significant, such as the nest of bird eggs attacked by the snake, the wild goat in the natural state, hunting. stage, etc. In short, there is a lot to see and discover.

But who are the Note Bubbles? Luigi Ciavarella explains: “The Bulles Notes are a meeting point between the poetry of Gina Palmieri and the jazz music of the quintet, with an astonishing Tiziano Paragone among the most prolific authors of the work, also here as arranger. The moving image of Renato Sellani in the album’s incipit and final coda, which occurs in an extraordinary solo intervention on the piano, a spiritual testament, which has an autumn flavor, you can almost capture the perception of signs. tangible elements of the permit to live. A superlative group (excellent songs Good Night and Sofia but also improvisation of Continuous Dance) with the presence of great talents in an album with great reading potential, which is already shaping up to be a classic of the genre ”.

Saco Grange no. 53 goes strong and focuses on community giving