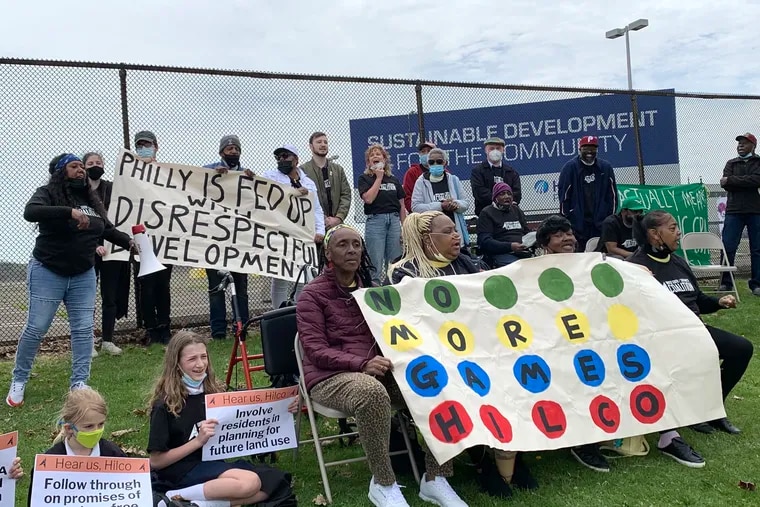 As the now closed Philadelphia Energy Solutions oil refinery is redeveloped, South Philadelphians are demanding a say in the process and the benefits to the community.

Members of a neighborhood coalition of 22 organizations called on the refinery’s new owner, Hilco Redevelopment Partners, to broker a deal that would require the company to provide benefits to surrounding neighborhoods.

Gathering outside the old refinery site on Thursday afternoon, activists said HRP had not committed to the community benefits agreement, commonly known as the CBA, after several discussions with the group, the United South/Southwest Coalition.

After enduring decades of pollution from the former refinery, residents of surrounding neighborhoods – predominantly working-class people of color, many of whom have had cancerasthma and other health issues they associate with dangerous emissions from the refinery – say they want to make sure the redevelopment of the 1,300-acre property benefits the community and doesn’t leave them out of the process.

“We want to be at the table,” said Earl Wilson of the Eastwick Friends and Neighbors Coalition, one of the member organizations. The deal, he added, would “ensure transparency and accountability during the redevelopment.”

Residents waved signs and chanted outside the refinery’s fenced property, visible from West Passyunk Avenue. They unfurled a banner that read “Philly is fed up with disrespectful development.” Behind them, on the other side of the fence, a Hilco billboard made a promise: “Sustainable development for the community”.

Hilco Redevelopment Partners purchased the property in 2020, after the refinery closed following the June 2019 explosion and fire at the site. HRP plans to clean it up and set up e-commerce, logistics and life science businesses on the sprawling site, which it has named the Bellwether District. The company has signaled that it is open to a CBA, but wants guidance from board member Kenyatta Johnson, whose district includes the refinery, WHYY reported in December.

READ MORE: Here’s what to know about the developer buying the massive Philly refinery site

Jasmine Sessoms, HRP’s senior vice president for corporate affairs, said Thursday that the company “remains committed to a CBA” and wants input from the community. She said HRP was waiting to receive the list of demands from the coalition, and she noted that the company had donated to the community and set up a program to provide training and internships for students in the city.

“Tell me what you want, guys. I’m open for a CBA,” Sessoms told residents at the rally. “Let’s go for it. Send us the requests.

After meetings between the coalition and HRP, coalition organizers sent an open letter to HRP in mid-March outlining demands to launch the CBA negotiation process.

“We haven’t got an agreement on the process yet, and yet the redevelopment continues to move forward,” said James Gitto, president of the West Passyunk Neighbors Association. “We believe Hilco and the city are about to be what they say they are. … We are here today to call on all parties to practice what they preach and take action.

Developers are not required to enter into CBAs, but supporters of the agreements see them as a potentially powerful tool to prevent harmful side effects of development, such as gentrification. They were used elsewhere in the city, including for the Schuylkill Shipyards development and Sugar House Casinoessentially creating contracts between developers and community groups that require a developer to provide benefits, amenities, or mitigations to the surrounding area.

READ MORE: What contamination lurks on — and under — the closed South Philly refinery

Hilco Redevelopment Partners pledged the Bellwether neighborhood project will be “a global model” of sustainable development, will provide thousands of jobs and will be an economic driver for the city.

“They said they were going to adopt the community. When are they going to do it? said Grays Ferry-based Philly Thrive member Shawmar Pitts. “We want you all to be part of the community like you said. That’s all we want. We don’t want more than that. Because time and time again, for generations, we’ve been left behind. for account.

The refinery was emitting dangerous chemicals, including cancer-causing benzene, at above-acceptable levels, leaving residents to bear the health costs. Residents blame pollution for high rates of cancer, asthma and other illnesses in the community.

“We’ve suffered from this refinery for so long,” said Betty Beaufort of the Friends of Queen Memorial Library in Point Breeze. “Now we have a chance to represent ourselves and be at the table so that we don’t go through the same things we’ve gone through all our lives.”