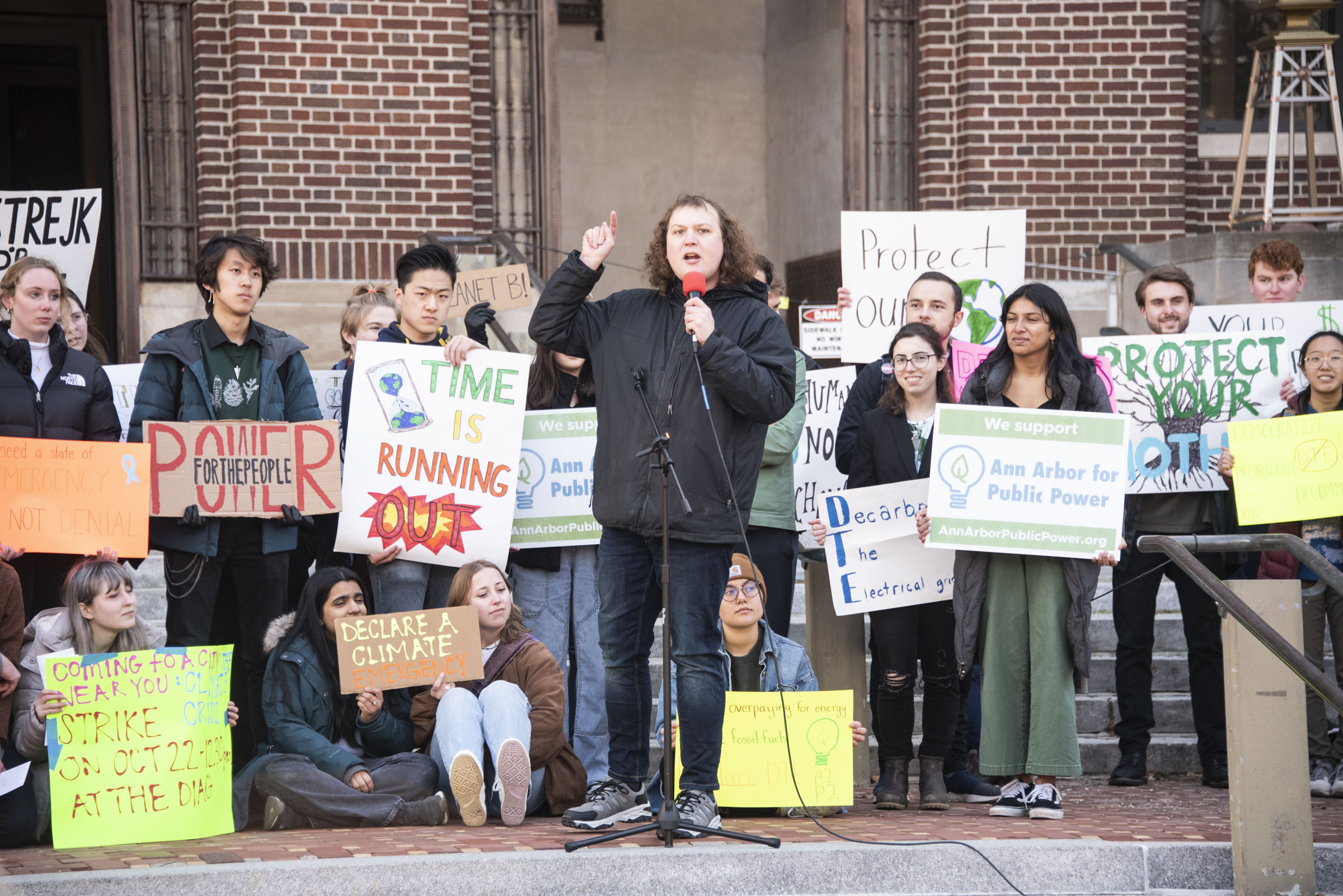 More than 100 students gathered on the Diag Friday afternoon as part of a global climate strike organized by Future Fridaysa group led by young people organization dedicated to the fight against climate change. The theme of Friday’s strike was “People Before Profit” and speakers called for climate action centered on social justice.

The event kicked off with live music and educational stalls on topics such as the United Nations’ Intergovernmental Panel on Climate Change (IPCC), the fight Landback movement and the means to fight against climate change through public policies.

Speakers from various student and local organizations then addressed the attendees, emphasizing the importance of clean energy and climate justice.

“Climate justice is social, economic and political justice on all fronts,” Crilley said. “It’s racial justice, it’s gender equality – and that can’t be achieved without tackling the complex systems of oppression that have created all these problems.”

Greg Woodring, President of Ann Arbor for Public Power (AAPP), discussed the importance of transitioning to a public service instead of lean on a private company. The AAPP organization advocates for a shift to a clean, renewable, City-owned Ann Arbor energy grid. Currently, the city’s electricity is supplied by the Detroit-based company Energy DTEwith about half of the company’s electricity supply being generated by coal.

Other speakers expressed frustration with the University of Michigan’s lack of communication and collaboration with students on climate justice, given the substantial efforts made by student organizations at the University.

Young engineer Brendan Ireland said he was frustrated with the University’s lack of progress on carbon neutrality and other climate goals despite pledging to be carbon neutral by 2040 in May 2021.

“Just meeting the IPCC targets is really not enough,” Ireland said. “If we are meant to be the leaders and the best, we have a responsibility not only to achieve the goals, but also to help others achieve the goals.”

Martin Chown, director of research and development for Students for own Energy, recounted a proposal he helped create in first year, which called on the University to build a solar panel in the form of an “M” block to symbolize the University’s commitment to carbon neutrality.

“We have confirmed that the project is feasible with solar contractors,” Chown said. “We even raised $100,000 for the project. And yet, here I am, three and a half years later, no “M” block solar panel. »

Chown said he thought it was emblematic of the University’s reluctance to take student concerns seriously.

LSA senior Zackariah Farah said he felt it was crucial for the Board of Regents to sit down with student groups and take their concerns seriously.

Ireland then read a open letter signed by more than 15 environmental advocacy groups calling on the university’s board and administration to prioritize sustainability and climate justice, especially when it comes to new hires and the appointment of university leaders.

In March 2021, the President’s Commission on Carbon Neutrality (PCCN) released its final report with 50 recommendations to put the University of Michigan on track to achieve net zero carbon emissions by 2040. The open letter calls the University to be more transparent when it comes to its progress on PCCN goals.

“We, the undersigned, expect real, quantifiable, and consistently communicated results with respect to the university’s commitments to divest from fossil fuels as well as the transition to carbon neutrality as set forth by the President’s Commission on carbon neutral,” the letter read. “We are deeply troubled by the insufficiency Litter 1 2040 commitment to neutrality, which is incompatible with the commitment of our community as a whole A2ZERO objectives, as well as the international recommendations of the United Nations IPCC reports.”

Outside the Fleming Administration Building, students chanted “We are unstoppable; a better world is possible. Eight copies of the letter were placed in the mailbox of the building, each addressed to one of the eight regents. University administrators moved into the new Ruthven Museums building last month; the Fleming Building is scheduled to be demolished later this semester.

Farah went on to point out the University’s failure to take substantial action to address climate change and the indifference he has observed from the board of trustees on the issue.

“The University of Michigan should be a leader in many areas, including climate justice and climate action, but it’s absolutely not,” Farah said. “I’m very frustrated at the moment, but seeing this rally, feeling the energy, I have a lot of hope again.”