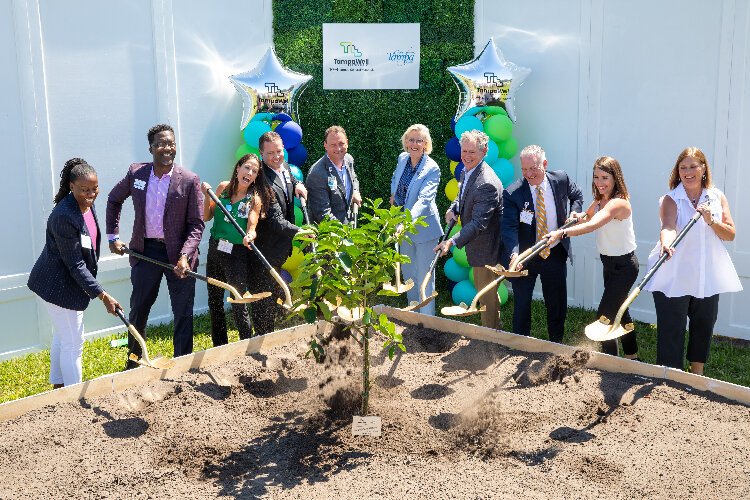 Some notable changes are coming to Family Care Center Healthpark at Tampa General Hospital in East Tampa over the next few months.

A community garden will take root, offering lessons in agriculture and healthy eating habits. Primary care physicians at the center will regularly include exercise in their patient treatment plans and begin prescribing healthy foods as medicine. Patients will be able to fill these prescriptions at a new on-site pantry stocked by Feeding Tampa Bay. Farmers’ markets will come to this community, which health officials say is labeled a food desert.

It’s all part of TampaWell, a new health and wellness initiative that Tampa General and the City of Tampa are launching in conjunction with a host of community partners. The program begins in the historically Black East Tampa community, with a plan to expand throughout the city.

“It’s no accident that we’re starting in this community and moving this initiative across the city,” Tampa President and CEO John Couris said at a May 10 launch event at Family Care. Healthpark. “The reason we’re starting in East Tampa is because it’s a community that deserves health and wellness. And it has to start here because Tampa General, myself included, believes it’s a God-given right for every man, woman, and child, no matter where they live, no matter their ability to pay, to have access to world-class healthcare services.”

The Tampa General Hospital Foundation donated $1 million to launch the program and support its first year of operation.

Speaking at the launch event, Tampa Mayor Jane Castor said Tampa’s continued growth, ability to continue to attract business, and overall quality of life all depend in part on health. and the well-being of its residents.

“Research shows that simply putting a farmers’ market in a food desert neighborhood improves the physical well-being of the entire community,” Castor said. “It’s important individually, but it’s also important as a community because we need to be healthy to accomplish everything we want to accomplish here.”

The Florida Department of Health’s July 2021 update to Hillsborough County’s Health Equity Profile for the county highlighted some racial inequities in health, including higher rates of infant mortality, death by cancer and complications during pregnancy and childbirth among the county’s black population. These types of inequalities are one of the reasons Tampa General is launching the program in East Tampa.

“This resort is really about the people in this community, the health of the people in this community, so we wanted to start somewhere where we’re already embedded,” said Kim Christine, Tampa General’s health and wellness administrator. . “It’s a community that we know has needs. There is a need for access to health. There are a lot of uninsured and underinsured people here. We know it’s a food desert, so they need to have access to healthy food.

The TampaWell program is based on the Wellness Valley program in the Romagna region of Italy, where some 250 public and private organizations have partnered in a community wellness initiative that promotes healthy lifestyles as a preventative measure to lower rates chronic diseases and serious health problems. .

Expanding citywide, TampaWell will include a mobile app and mile markers with QR codes along the city’s recreational trails that will lead to information such as trail maps and fitness tips. and will allow users to track their progress in achieving fitness goals.

In the future, there are also plans to develop a “health trail” connecting downtown Tampa General and Davis Island properties to popular recreational routes such as Bayshore Boulevard, Cass Streets bike paths and Jackson and the Selmon and Meridian Greenways.

Before that, the plan is to work to build traction in East Tampa. At the launch event, several speakers noted the wider range of issues facing the community, including aging infrastructure, an underdeveloped public transit system, and gentrification that is pushing longtime residents to measure. that people are moving from out of state.

Kevin Carr, president of the River Grove Neighborhood Association, said residents who live in the area need to be involved for the program to succeed.

“We have to do it as a community,” he said. “This initiative is essential for us for the well-being of our community.”

Thaddeus Bullard, also known as WWE wrestler Titus O’Neil, also supports the program through his Thaddeus Bullard Foundation. Bullard’s involvement in the community has included a significant donation of time and money to help improve Sligh Middle Magnet School. In some off-the-cuff comments at the launch event, Bullard took to the podium to reinforce Carr’s call for community involvement.

“I don’t have a politically correct way to say this – if we all want more, we’ll have to do more,” Bullard said. “Period.”