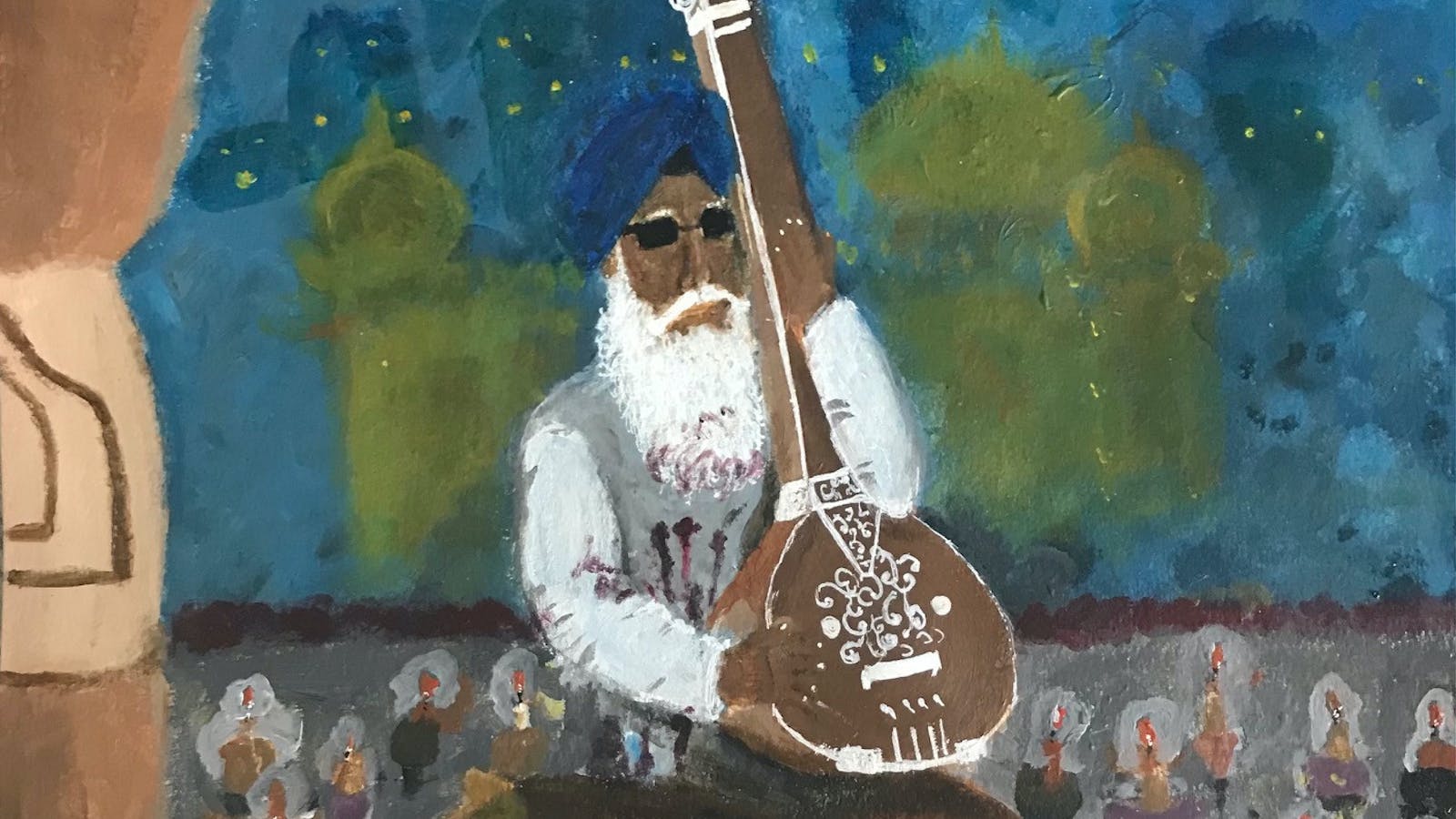 the harmonium strikes a chord in our spiritual selves [narrative]

At the heart of the Sikh temple, or Gurdwara, under a canopy of fragrant marigolds, draped in thick blue velvet and resting on a dais, is a beautifully calligraphic book. Within this book are the 15,575 stanzas of the 6,000 poems that make up the Guru Granth Sahib, the central religious scripture of Sikhism, first compiled over 400 years ago.

Is it music? What is music? I see music as a collection of honeyed bits of sound sequenced to shape auditory delicacy. The melody, a singing puff of heat, fights a battle that echoes through the air. A halt, the tumult broken by a sudden seismic calm. It’s simple. You can almost taste the rich flavors of harmony on your tongue. It’s ambrosia that I sometimes don’t think we really deserve: an ethereal, spiritual experience. In Gurdwara, I sit among a mass of people gathered in a room to listen to an invisible art form. The majestic euphony of instruments and voices floats high in the air and warms the soul of each individual with the heartbreaking pace of music and the repetition of God’s name. I find it almost impossible not to equate this musical experience with a divine experience.

Sikh tradition revolves around the beliefs, teachings and religious advice in this holy book written by several authors and compiled during the period of the Sikh Gurus, from 1469 to 1708. My Sikh Faith revolves around the Gurmukhi scripture that fills the pages of the Guru Granth Sahib, composing devotional hymns that praise the nature of God and the lifestyle that flourishes from the daily remembrance of God.

I could spend hours contemplating the ineffable mystery of God. For Sikhs, God cannot be represented; God is neither male nor female, but an entity or force of nature that exists in everything and everyone. A Western scientific perspective may be tempted to personify Waheguru, but we must understand that Waheguru is an omniscient and omnipotent source of energy, not a father figure to the deity. The interconnectedness of the universe, the cosmos, and its creation and Nanak’s theory of God’s energy and God’s creation of the universe overlap in a way that grounds my religious study in modern science. I’m fascinated by the idea of ​​yuga, the Sikh word for era, which is a recontextualized concept from Hinduism.

We are currently living in kaliyuga, which is the turbulent and violent period between the Big Bang 14 billion years ago and the end of the universe as we know it, before the next Big Bang event and the start of the next yuga . Karma and reincarnation are woven into all South Asian religions in the context of liberation from the suffering of life and death through meditation. What strikes me about Sikhi is that the guru recognized the concentric circular notion that the cyclic form of karma persists in nature as well as in faith – we can see this pattern repeating itself in the cycles of terrestrial biosphere, the cycles of the planets of the solar system, and the cycles of creation and destruction of the universe. This concept helps me understand the cycles of my mind, my body, and my entire life as part of a larger workings of the universe. If my soul momentarily appears on this Earth in the form of my body, it will inevitably return to the greatest source of all-encompassing energy, Waheguru. No matter what happens in my mortal and tumultuous life, I will always be part of Waheguru. Gurbani states that, “In this dark era of Kalyug, the chanting of Kirtan is king, the Gurmukhs sing it with their focused minds.” Sikh scripture introduces the concept of using music as an instrument of peace in troubled times for human experience.

Music is considered a concept that predates the human race. It is considered a divine practice of worship in many religious traditions. The mathematical structures behind music theory are referenced in the Bible as the fundamental explanation for the harmony of all life. When humans discovered the sacred nature of musical notes, musical intervals, and the mathematics behind musical compilation, music offered ancient scholars a method to quantify the sanctity of the world, planets, and cosmos through invocation spiritual sound. Harmonic Theory facilitated the shift from interpreting spiritual life through the limited intellect of the human mind to scaling spirituality to the entire universe and its interconnectedness. I believe that if music, a mere organization of sound, is a record of cosmic divinity and a vessel of sacred communication, then all human beings must have a “harmonic origin”.

The first shabad, which means sacred song, of the Guru Granth Sahib begins with Mool Mantar, which serves as a common thread that weaves the whole text. In Sanskrit, this root text is defined as sutra. Many South Asian religious scriptures follow this structure seen in Sikh writings – the sutra is followed by commentary pages. And in the case of the Sikh incarnation of the gurus in a book, Mool Mantar is followed by 1,430 pages of poetic elaboration. I memorized those first lines as a small child and always repeat them at bedtime, but I’m still amazed at the complexity of their meaning. Mool Mantar distills the central dogma of Sikhism. There is Ik Onkar, or One Creator. I hear the sound of Ik Onkar resonating in Gurdwara, in homes and in minds around the world. The root of the Sanskrit word “Om”, or the “sacred sound” originally recorded in Hindu Brahmanic texts, is found in the word Onkar, which means Creator. Om, which signifies the unity of all the energies of the universe in a single syllable, is used to describe the all-encompassing nature of the Sikh belief in Waheguru. Om is all in one sound, and Waheguru is supreme reality unseparated from everything and everyone.

Sikh gurus have recognized the power of music to help a Sikh practice naam simran, or daily remembrance of God. Beneath the layers of folk tales, poetic symbolism, and lessons, reading, listening to, or chanting Sikh scriptures is essentially a form of repeating God’s name and finding solace in suffering through that repeating. Non-attachment is a major element of Sikhism as well as older South Asian religious philosophy. Contemporary Sikhi still live and participate in everyday life, but seek freedom from the ups and downs of worldly life by remembering God and keeping God’s grace, or Meher, in mind. When a Sikh is not attached to temporary and insignificant events, he can better keep love and joy in his heart. Guru Nanak, the first Sikh guru, believed in the metaphor of the lotus growing in muddy water. Even though the lotus is surrounded by earth, it keeps its head above water without getting submerged. The lotus keeps the head turned towards the sun, or Waheguru, just as a person should focus on God while remaining afloat and level despite the worldly distractions of attachment. Sikhs who achieve this will flourish in the radiance of God and attain enlightenment. Although attaining enlightenment is not the goal of religion in my life, the practice of meditative thought offers the perspective that I so often miss in the overwhelming chaos of everyday life. Guru reminds me not to berate myself for losing sight of naam simran by lovingly guiding me in the practice of being with a welcoming God whenever I feel lost under the murky waters of anxiety, pride and sadness.

A Sikh comes to the true understanding that to reach God, we must end the tormenting battle of attachment to temporal, mundane and materialistic matters. Singing God’s praises reminds us that energy cannot be created or destroyed, only converted from one form of energy to another. Sikhism sees God on a fundamental, particulate physical level. Ajooni, a core concept of Mool Mantar, states that Ik Onkaar does not condense and enter any birth. All phenomena of birth and death form within Waheguru. Release from the tumultuous cycle of energy being recycled into organic matter through the variations of life and death can be achieved by remembering that we are all already part of Waheguru. The cycle is only an illusion of mortal triviality.

Lakh Khushian Patashahian, the shabad which plays as a musical blessing to Gurdwara during wedding ceremonies, reminds newlyweds that “hundreds of thousands of princely pleasures are enjoyed, if the True Guru bestows His Gaze of Grace”. Music helps me feel God and be with the physical vibrations felt when I chant God’s name. The experience of invoking Waheguru into our physical bodies and vocal cords to create beautiful art as a community celebrates our interconnected lives, origins, and futures in the cosmos and beyond. Poetry set to music can paint the indescribable beauty of Waheguru in a way that words fail to capture.

Bears announces $103,000 grant for A Safe Haven Foundation as winner of Community All-Pros