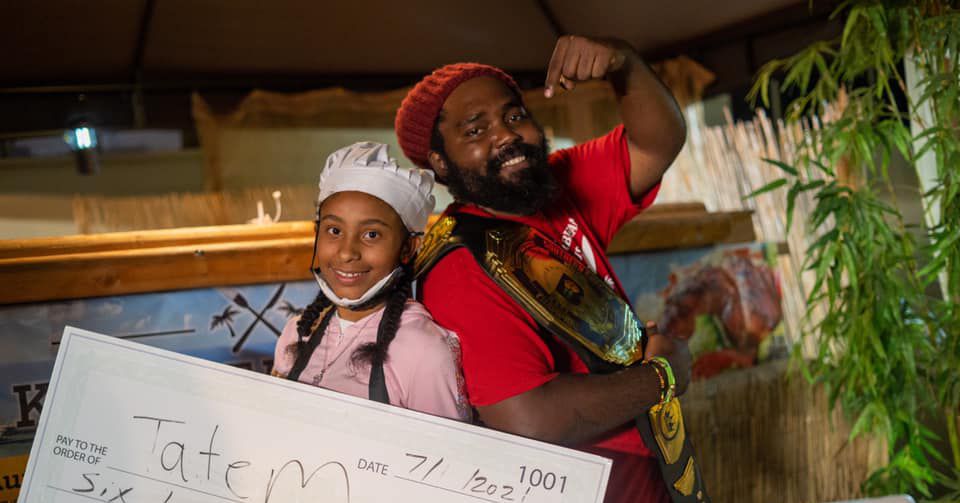 The people who fuel the black rebirth of southern Oregon

When planning a Black Owned Food Truck Competition in Medford, Ore., The conditions have to be near perfect. The city, in the heart of southern Oregon, lies in Jackson County, where the Black population is only 1%; the region has a long history of institutional racism with still impactful effects on the people of color who live there today. Beyond the racial climate, any event in summer risks being smoky by the now annual forest fires in the region. It was, in short, a gamble; everything needed to be well. But as BASE (Black Alliance & Social Empowerment) South Oregon, a black nonprofit community organization based in Ashland, was set to host its first Food Truck on Friday this summer, Medford skies responded with a rainstorm that lasted until the start of the event. BASE organizers and the food carts that had arrived prepared for a paltry turnout.

Instead, hundreds of community members gathered in the backyard – a new food cart and event space – to enjoy the competition between six of Rogue Valley’s black food truck owners. This was the first event of its kind – many of the carts that arrived only learned from each other that day, specializing in everything from the Caribbean to barbecue to seafood. Live DJ spins in the background as families order baby back ribs and jerk chicken, sticking around for a Choppedcooking-style competition which included scholarships for local black students.

In many ways, Food Truck Friday was the culmination of a summer in which BASE, which formed in early 2020, made its influence undeniable. In early June, BASE partnered with Oregon Black Pioneers and a host of other organizations in southern Oregon for a weekend of events honoring the renaming of Ben Johnson Mountain, including a guided hike to the BASE youth program, Afro Scouts. Later that month, they hosted Medford’s first Juneteenth Festival, featuring music and many food trucks that would later participate in Food Truck Friday. For BASE, these kinds of events have become a way to strengthen and connect the black community of southern Oregon; Black leaders have become an integral part of this mission, fueling events and developing relationships with the region as a whole. In turn, BASE helped these food cart owners develop a bond that kept them afloat through a particularly perilous year.

Rogue Valley in southern Oregon is an unlikely setting for a revival of the black community. Jackson County has long known as a hub for white supremacist activity and Patriot adjacent to white supremacy and Secessionist movements, many of which came to life following the 2016 election of former President Donald Trump. The anti-blackness is particularly pronounced in the Rogue Valley, an enclave interwoven with the Rogue River that sits at the point of entry to California. The Oregon Board of Geographical Names did not rename Jacksonville’s Ben Johnson Mountain to â€œNegro Ben Mountainâ€ until 2020; before 1964 he had an even more derogatory name. Ashland teenager Aidan Ellison was killed by a white man for allegedly playing loud music in November 2020, a story eerily similar to that of Jordan Davis, whose murder was the subject of national news headlines And one HBO documentary. As a result, many black residents face daily invisibility and isolation, as well as the silent but ubiquitous residue of Oregon’s exclusion laws creates a gigantic obstacle for black businesses in the region.

This challenge – and the desire for a larger, narrower black community – has been a defining factor in the development of BASE Southern Oregon, according to founder Vance Beach. Beach, originally from Phoenix, moved to Ashland in 2007 to study at Southern Oregon University. He never intended to stay after graduation, but after meeting his future wife and fellow BASE organizer, Tiffany Beach, a longtime resident of southern Oregon, he decided to settle in Ashland. This included not only building a family, but also an autonomous black community.

While visiting family in Phoenix, Vance Beach helped his sister launch the BASE chapter in Arizona in June 2020. The organization began with a focus on economic development, and one of their first and most popular events were the Food Truck Fridays, which they now run monthly. When he got home, Beach and other volunteers in southern Oregon began to think about how they could organize the event in Rogue Valley.

With a black and brown population significantly smaller than Phoenix, they knew they had to be creative. While the Phoenix version was just a gathering, BASE Southern Oregon decided to turn the event into a competition to increase the entertainment factor. They collaborated with other nonprofits and organizations from the start, inviting judges who included representatives from the nonprofit Rogue Food Unites and the What to Do tourism platform in southern Oregon. BASE also presented prizes which included scholarships of $ 600, $ 400 and $ 200 for student sous chefs, awarded to each food truck chef.

â€œIt was like we were on the Food Network,â€ says Daniels, a 20-year-old Rogue Valley resident. In A&R BBQ’s 12 years in business, Daniels says it’s the first time he’s experienced this kind of recognition from black-owned businesses in the area.

According to BASE founder Vance Beach, building community is the essence of the organization, and food is at the heart of that work. â€œWe are a communal people and food is one of the # 1 things that brings people together,â€ he says. â€œThere are things called Chinese cuisine, there are things called Mexican cuisine – all these different cultural foods. When you talk about black food, however, you call it soul food. Food and our story behind food has always been on my mind.

With the success of the first Food Truck Friday, many community members have asked BASE when they plan to host the next one. Initially, Beach said the plan was to run the event quarterly; However, COVID-19 and the wildfire season have created major hurdles for the organizations and leaders she works with. At some point in August, 28% of state COVID hospitalizations were in facilities in southern Oregon, although they only made up about 13% of the population. Meanwhile, Jackson and neighboring counties spent weeks on air quality advisory due to smoke from northern California wildfires and Oregon waterfalls, while hundreds of thousands of acres burned around the state.

For black food truck owners in Rogue Valley, the region’s tumultuous environment has posed significant challenges for them as business owners, from access to ingredients to physical health risks. Before opening his food truck, Freddie Dunbar, owner of Freddie Lee’s Seafood Smorgasbord and regular seller at BASE events, worked at Costco after a stint in the military. When he started his business in early 2020, he admits he was terrified.

â€œIt was my first time running a self-employed business. I was doomed, but I couldn’t let that happen, â€says Dunbar. “Every day I woke up I had no idea what was going to happen and I just took whatever was happening that day.” Dunbar says COVID-19 and the ongoing wildfires have caused significant supply chain issues and made it difficult to assess how much food to buy in any given week. â€œThe shelves are empty,â€ says Dunbar. â€œI went from buying pre-cut products to save myself time to buying lettuce heads and cutting myself. “

While it has been a challenge, he notes that, in many ways, COVID and the wildfires have leveled the playing field for underdogs like him. Without expensive rents and significant staffing needs, food trucks stepped in to fill the void left by restaurant closures. Dunbar and Al Daniels agree that circumstances have forced their businesses to adapt in a way that will pay dividends after the pandemic. â€œIt gave us a masterclass,â€ Daniels says. â€œWe have a tougher skin to deal with these natural disasters. “

â€œWherever you are geographically, you have to meet people where they are to really build a community. “

Part of their survival strategy was based on solidarity among other black business leaders; for many of them, BASE has helped build those relationships, helped them connect. On Food Truck Friday, Dunbar first met several of his fellow black food truck owners in Rogue Valley; they have continued to stay in touch ever since, often collaborating and promoting each other’s community events. â€œWe don’t have an NAACP chapter here,â€ says Dunbar. â€œWe don’t have a small business association for black men. We have nothing, but we have BASE.

Due to the uncertainty surrounding the pandemic and the lingering effects of the wildfire season, BASE cannot set a certain date on the calendar for the next Food Truck on Friday. Still, the organizers and owners of black food trucks aren’t worried that the anticipation wears off. With new customers, new event deals and, perhaps more importantly, an organized community group behind them, the black food cart owners of southern Oregon feel like they’re on bases. stronger than two years ago.

â€œAt BASE, we shape our story. Someone else isn’t doing it, â€Beach says. â€œWherever you are geographically, you have to meet people where they are to really build a community. “

“We don’t have a food truck scene like in Portland, but there are people here doing this damn thing in the kitchen and it’s great to know them ourselves and introduce them to other people.” , says Jessica, a BASE volunteer and parent. Free man. â€œFood brings people together. “