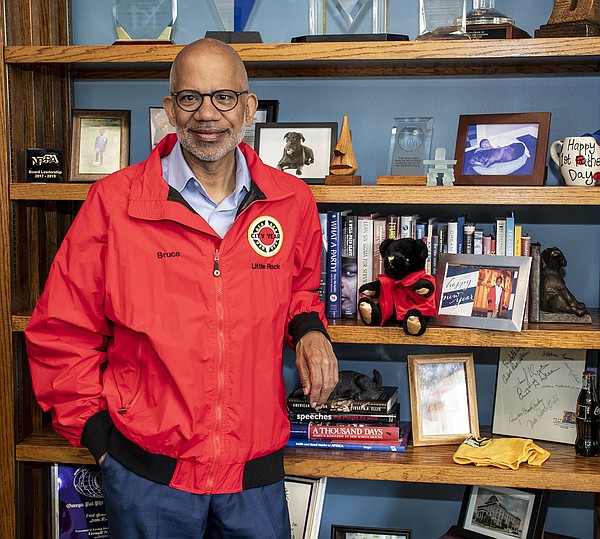 The Red Jacket lunch will always be a ball

City Year Little Rock is dropping the “bullet” portion of its annual Red Jacket fundraiser for a more casual lunch on May 26 at the Heifer Village clubhouse.

In the past, the Red Jacket Ball was a sit-down dinner with revelers in cocktail attire at a ballroom in downtown Little Rock. This year, the Red Jacket Luncheon will be held at the open-air Heifer Pavilion.

Due to the covid-19 pandemic, the ball was canceled in 2020 and 2021. When organizers began considering a location for the 2022 event, it was unclear whether indoor events would be appropriate.

“We knew we couldn’t take another year off to tell our story,” said Little Rock City Manager Bruce Moore, who serves as Co-Chair of the City Year Little Rock Board of Directors. “We thought a lunch would be easier for people who might still be a little nervous about being out at night at a big event.”

City Year was founded in 1988 as a national service program to unite young adults from diverse backgrounds for a year of full-time community service. Since then, City Year has grown from 50 corps members in Boston to more than 3,000 members in 29 US cities, South Africa and the UK, according to its website.

“In the communities we serve, the year of the city [red] is a powerful symbol of idealism and the power of young people to make a difference,” according to the organization.

Stephanie Streett, executive director of the Clinton Foundation, contacted Moore in 2004 and told her that former President Bill Clinton wanted to establish a City Year in Little Rock. Moore has served as city manager since 2002.

“When he was running for president, he saw the organization in Boston and said the light went on for him because he always cared about children and education,” said Moore. Clinton was president from 1993 to 2001.

Moore then traveled to a national City Year conference with a dozen Little Rock leaders to explore the possibility of bringing the organization to the capital.

“I’ve been involved with a lot of nonprofits, I’ve been on a lot of boards because I love to give back, but City Year really makes a difference with kids every day,” Moore says. “We had to make a decision early on what was going to be our focus as an organization, and we very quickly said education and the evolution of education in our public school system.”

City Year is a division of the AmeriCorps Community Service Program. The City Year Little Rock branch began in 2004 with retired Army General Wesley Clark as founding chairman of the board.

Through this program, young people (often recent college or college graduates) spend a year or two in one of the country’s poorest communities, helping the public school system. For some students, this is considered a “gap year”.

City Year members work with students, individually or in groups, encouraging them in subjects such as math and English and even class attendance.

“It’s been our priority since the beginning, and what the members of the working body do day to day from an academic, social and emotional standpoint is nothing short of amazing,” Moore said. “There are many organizations but I have never seen one like this that is in schools every day and making a difference.

“And I’ve seen kids who weren’t even speaking at the start of the school year and by the end of the year their grades are up, their literacy scores are up, and they’re not just interacting with members body but with fellow students and teachers and mentors,” Moore says.

As city manager, Moore was invited to serve on numerous boards and commissions.

“I strongly believe that to have a viable city, you need to have a viable public education system,” Moore said. “So I’ve always leaned towards that area. I’m a parent of a freshman at Central High, and Luke has been in the public school system since kindergarten. … It’s always important to give back, and I know that some of our children in the public school system could fall through the cracks.

“So we have to be there to help stabilize during this time when they are with us during the day, which hopefully has a direct link to improving family life and improving social skills” , he said.

“We’re always trying to expand the body so we can focus on more students and just overall support for the organization,” Moore said. “It’s truly remarkable. The transformation you see in the kids who take part in City Year is just amazing.”

More luncheon information, including sponsorships, is available by calling (501) 707-1400 or emailing Rebecca Moll at [email protected] Individuals can purchase tickets or sponsorships at bit.ly/redjacketluncheonLR.

City Manager Bruce Moore proudly wears his red City Year jacket in his City Hall office recently. The non-profit organization’s website states, “In the communities we serve, the City Year jacket is a powerful symbol of idealism and the power of young people to make a difference. (Arkansas Democrat-Gazette/Cary Jenkins)