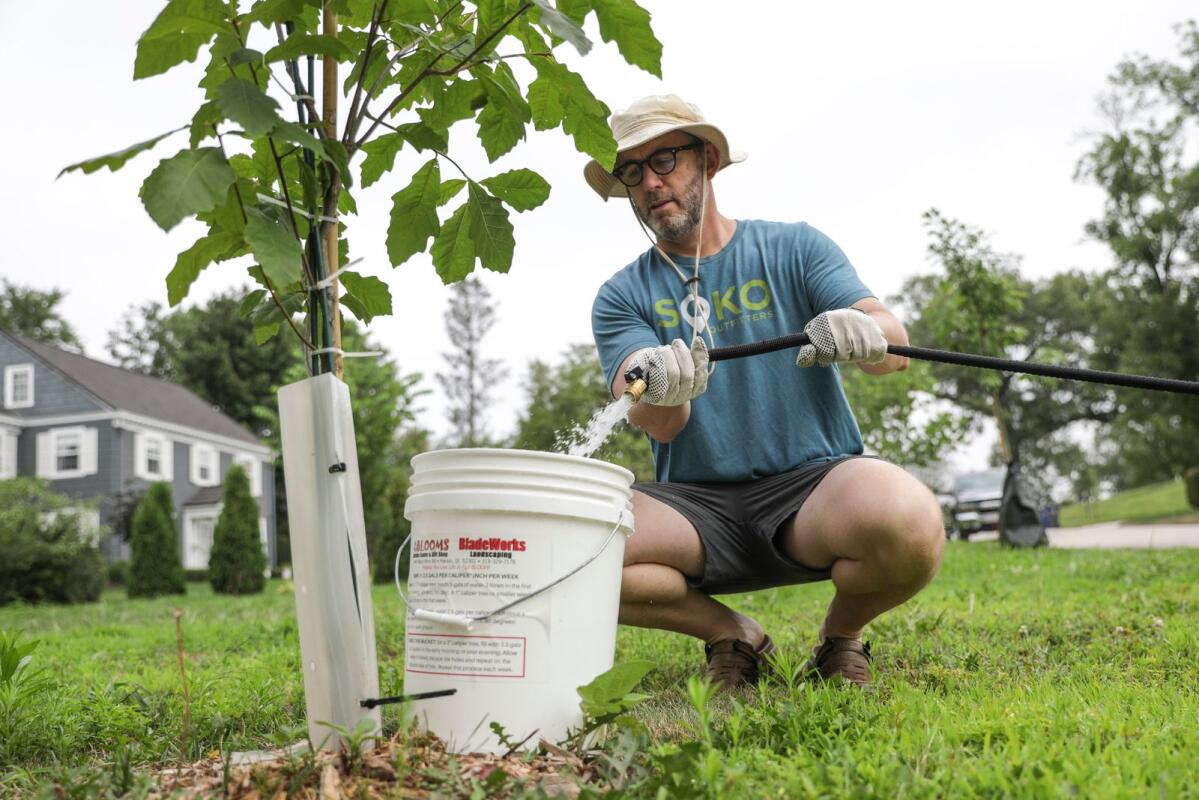 David Maier follows his Friday routine of caring for neighborhood trees in Cedar Rapids. “What can we do as residents, as community members and as people who have a network to help make a difference? he asked to help find ways to recover from the August 10, 2020 derecho. (Geoff Stellfox/The Gazette)

David Maier follows his Friday routine of caring for neighborhood trees that have been planted to help rebuild the tree canopy of Cedar Rapids devastated by the August 10, 2020 derecho. (Geoff Stellfox/The Gazette)

CEDAR RAPIDS – When David Maier emerged from his home in southeast Cedar Rapids on Aug. 10, 2020, he found the tree canopy in tatters.

The mature trees that had protected the historic homes for decades had crumbled after losing a battle against the wind. Chainsaw-wielding neighbors soon poured into the streets, filling the air with the rumble of shredded wood.

“It looked like a war zone,” said Maier, a 54-year-old chief financial officer. “It was just complete and utter devastation.”

Gusts of up to 140 mph tore through Cedar Rapids on that fateful day. Every block suffered damage. Pieces were torn from homes, businesses and infrastructure. The crops bowed to the dominance of the storm. One of the storm’s many lasting legacies was its brutal blow to the canopy of Cedar Rapids: it wiped out about 65% of the city’s trees.

To help restore the canopy, the Cedar Rapids City Council in February approved a $37 million ReLeaf plan — a collaboration between the city and the nonprofit Trees Forever that aims to plant more than 42,000 trees. on public land for 10 years.

The public sections of the ReLeaf plan are relatively well-defined, guided by the number and location of tree losses, says Trees Forever ReLeaf program manager Kent VonBehren. But more emphasis will need to be placed on the other component of the plan – private properties – to fully revive the tree canopy of Cedar Rapids.

“Much of the focus so far has been on the public side of the plan,” VonBehren said. “One of the things that keeps me awake at night is how we’re going to do this on the private side.”

Of the 670,000 trees in Cedar Rapids believed to have succumbed to the derecho, about 85 percent were on private property. As the city rushed to create a recovery plan, several organizations quickly launched tree adoptions, including Trees Forever and Monarch Research. These adoptions continued in subsequent seasons.

Now, two years after Cedar Rapids was robbed of much of its precious greenery, Trees Forever and Monarch Research are rooting deeper into communities to replenish bare private properties. To fill the graves of the half a million trees around homes, businesses and open spaces, organizations rely on perhaps the most powerful tool of all: community members themselves.

“It’s going to require a level of citizen involvement – probably beyond anything we’ve done,” VonBehren said.

Arrival of the captains of the neighborhood trees

Trees Forever has facilitated just over 10,000 tree adoptions in the area since the derecho, said VonBehren, who estimated that 80% ended up in Cedar Rapids residences.

These distros are available for those who can take advantage of them, VonBehren said. But some residents might not be able to participate, for example, if they don’t have a car, don’t have time to salvage the trees, or can’t afford to take care of them. And once trees leave adoption sites, their final destinations are unknown, making it unclear whether they go to particularly needy homes.

This fall, Trees Forever is testing a more neighborhood-focused, community-focused approach, inspired by a full-fledged version currently thriving in Nashville, said Dina Haveric, ReLeaf’s new outreach and communications manager. . The organization will appoint neighborhood tree captains to help distribute free trees and ensure private canopies can flourish where they are needed most.

“The tree adoptions have been great. It was quick and it was gone,” VonBehren said. “But now we think we’ve tapped into something that we can do even better.”

The pilot program will focus on an unadvertised neighborhood in southwest Cedar Rapids. Once appointed and equipped, Tree Captains will go door to door and ask how many trees their neighbors might need. This issue will be submitted to Trees Forever, who will bring the trees for a day of distribution. Once the program is in effect, there will be 30 to 80 trees per neighborhood per delivery day, Haveric said.

This week, Trees Forever will recruit one or two tree captains to help lead the pilot neighborhood, VonBehren said. The program will ramp up in the spring to reach other Cedar Rapids neighborhoods identified by ReLeaf as having the greatest need.

“We will provide the trees, the guidance and the information, but a lot of it is neighbors helping neighbors,” VonBehren said.

Since its pilot planting season — launched a month after the derecho — Monarch Research has been a major supplier of trees to private landowners in Linn County.

To obtain trees on private property, the nonprofit partners with for-profit companies that purchase trees for their employees. It also partners with non-profit organizations that distribute trees to their employees or the communities they serve. And, starting last spring, Monarch Research gave private owners the option to purchase a minimum of 25 trees directly from it.

Now Monarch Research is moving into a more advanced phase of its plans, said co-founder Clark McLeod, using what he calls the multiplier effect where former tree beneficiaries pay the action forward.

“A number of these employees have already obtained all the trees they need,” he said. “We are offering (more) trees to these employees to take and help other people – their neighbor, their friend, their church.”

Monarch Research has always encouraged participants to share the love by donating trees to neighbors. But starting with the spring planting season, people who get trees through their employer can sign up to become volunteer ambassadors. It’s a commitment to take care of the trees and find them a good home, McLeod said, as well as follow up with the landowner for any help with planting and watering.

Formalizing the process will help Monarch Research know for sure where its trees end up, and the nonprofit will send out surveys to verify the trees about a year after they are distributed.

Ahead of its fourth planting season which is currently underway, the non-profit organization has planted approximately 42,600 trees. Forty-four organizations participated, along with 96 schools and over 100 woodlot owners. By the end of this year, Monarch Research is expected to have distributed approximately 55,000 trees in total. Its long-term goal is to plant 150,000 trees by 2026.

A few weeks after the storm, after being bombarded with before-and-after photos of windblown treetops, Maier and her husband decided to do something about it.

“I said, ‘Listen, we’re done crying. We will move forward,” Maier said. “What can we do as residents, as community members and as people with a network to help make a difference? They have joined a wave of residents who are going beyond replanting their own trees and helping more trees find new homes.

For example, after the derecho deformed most of the bulky bushes in her garden, Katie Fisher, 37, of Cedar Hills, decided to revive what she calls her “woods in the middle of Cedar Rapids.”

Lured by Trees Forever’s subsidized trees, she lined up for a day of distribution – and ended up walking away with trees for her garden and her parents.

“It was exciting to drive through the pickup line and see how many cars were in line for the trees,” said Fisher, a mortgage lender. “We planted three trees on two different properties on the same day. It was fun to take ownership of the space.

Other residents have banded together with their neighbors to take full advantage of tree distribution opportunities, such as Douglas Wagner, 54, of southeast Cedar Rapids near Brucemore.

After moving into his home a year after the derecho, the radio host was looking for a cost-effective way to bring his once tree-covered yard and neighborhood back to life. Monarch Research’s opportunities for woodlot owners to purchase trees piqued his interest, but the minimum order of 25 trees would be a perfect fit for his backyard.

“The guy mowing my lawn would kill me,” Wagner said with a laugh. Instead, he invited several of his neighbors to band together for the purchase and share the resulting trees.

Seeing healthy tree canopies in other cities brings tears to his eyes, Wagner said, and he’s excited to infuse his area with a little more critical native habitat for the creatures.

“If you’re planting something that’s an ornamental tree, you might as well plant a polystyrene cylinder. It’s inert to nature because there’s nothing living on it,” he said. “That’s one of the big things, trying to bring more of these native trees back into the biosphere, into the neighborhood and into our backyard.”

As for Maier and her husband, they began their efforts in their own neighborhood, raising funds for stump removal and purchasing native trees from local nurseries. But they quickly focused on reforestation of the nearby Wellington Heights neighborhood.

Between spring and fall 2021, Maier and her husband planted more than 100 trees in the Brucemore and Wellington Heights areas, both on private and public property. They have also sponsored residents for the Trees Forever TreeKeepers program for tree care training.

Maier said his replanting efforts had slowed because he was focused on keeping his local fleet of trees alive. Two years after the derecho, he still spends four to six hours a week watering trees that are not on his property, which he considers his “babies”.

And, as the holiday season approaches, he plans to decorate budding trees with Christmas decorations, just like he did last year.

“I will continue to do this every year,” he said. “And I look forward to the day when I can no longer reach any of the branches of the trees.”