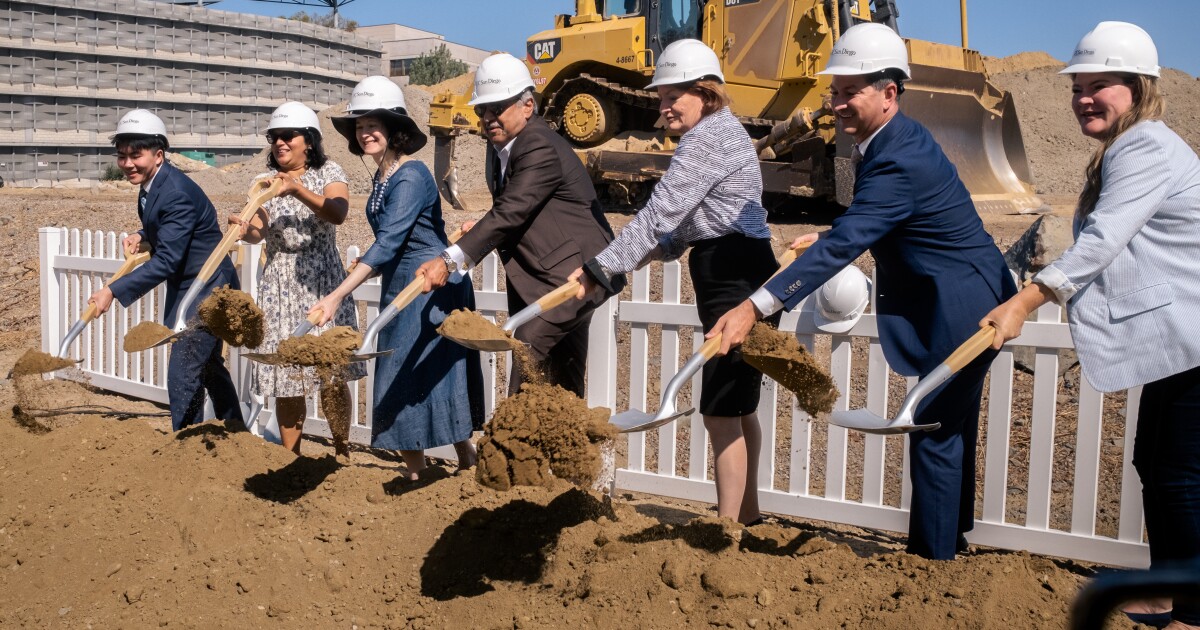 UC San Diego officials broke ground on Tuesday on a new on-campus housing development with beds for more than 1,300 students.

The Pepper Canyon West Living and Learning District, immediately adjacent to the main campus stop on the Blue Line streetcar, will provide housing for transfer students and other upperclassmen, who may face stiff competition for the on-campus accommodation.

Pradeep Khosla, the university’s chancellor, says housing costs – whether on campus or off campus – are a huge burden for students.

“In San Diego, because there’s already a housing shortage, it’s making it worse,” Khosla said. “I think as a campus, we owe it to our students to effectively use the land given to us by the community to build housing for our students.”

The dormitory project, slated to open in fall 2024, is supported by a $100 million state government grant that will help keep rents affordable for low-income students. A July press release said the university would “direct grant funding savings, $5 million per year, toward housing subsidies for eligible California undergraduates living on campus.”

Assemblyman Chris Ward said the state grant program would help build student housing at public colleges and universities around the state – but UCSD’s larger plans for more housing on campuses have made it more competitive.

“Because we’re ready to go, because the vision is there, and it’s all integrated, I think (that) has really placed UC San Diego very well within the state budget this year,” said said Ward.

UCSD reduces occupancy of its dorms last year in response to the COVID-19 pandemic – a move that meant sophomores were no longer guaranteed on-campus accommodation. Last month, the university reinstated its two-year home warranty.

Khosla said UCSD hopes to one day offer a four-year housing guarantee for undergraduates. In pursuit of this goal, several other dormitory projects on campus are in various stages of planning and construction.

Among them is the Theater District Living and Learning Neighborhood, which includes 2,000 dormitory beds for undergraduates. The towering scale of the project has sparked fierce opposition among La Jolla neighbors, some of whom have filed a lawsuit challenging the project’s environmental review.

In response to those lawsuits, the state legislature this year approved SB 886, which protects student and faculty housing projects from environmental lawsuits if they meet certain criteria. Ward said the bill, which awaits Governor Gavin Newsom’s signature, would help get housing to students faster.

“Let’s make sure we streamline things so we don’t wait a few more years to actually be able to innovate on good student housing projects like this,” Ward said.

The lawsuit, filed jointly by the La Jolla Shores Association and the Blackhorse Gated Community Homeowners Association, was colonized Last year. When asked to provide a copy of the settlement agreement, UCSD spokesman Matthew Nagel asked KPBS to file a request under the California Public Records Act.