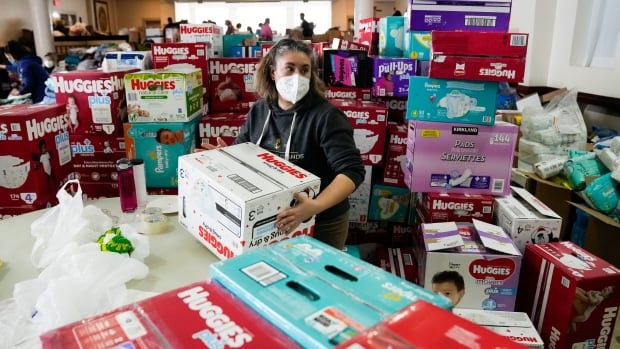 Organizers of a fundraiser in Ottawa for Ukraine say they can only accept donations for a few more days after being inundated with items over the weekend.

At noon Saturday, the hall of the Ukrainian Orthodox Cathedral in Ottawa was overflowing with clothing, non-perishable food, medical supplies and other items.

“We are at full capacity. We literally can’t take anything anymore. It’s a matter of health and safety,” said Olenka Reshitnyk-Bastian, humanitarian aid coordinator for Ukraine at the Ottawa branch of the Ukrainian Canadian Congress.

Only priority items in the future

The organization plans to send the donated items to Ukraine through Meest Corporation, a Toronto-based transportation company that has appealed for items to be forwarded to their partner organizations in Ukraine.

As for the clothes and non-perishable items that were donated, Reshitnyk-Bastian said they would be stored until Meest was ready to ship them.

“In about a week, Meest will come out and say, you know, we need food now and we’ll ship it,” she said.

James Fraser and Sarah Quigley were among those who stopped by the church on Saturday, bringing with them non-perishable food and feminine care items.

“I’m shocked at the amount of traffic…every street [nearby] is completely backed up, and they are completely full inside. So we leave things on the outside,” Quigley said.

Quigley and Fraser said they wanted to do something to help the people of Ukraine, especially since the past two years with the COVID-19 pandemic have not been easy.

“If we can make it a little bit easier for people somehow…that’s the best thing we can do,” Quigley said.

Donate money if you can, says expert

Charity Intelligence Canada has a list of organizations accepting money on its website. Bahen said it’s always better to do a little research before donating, and also to donate money online rather than to people collecting in person.

Even so, Reshitnyk-Bastian said sometimes people want to donate physical items rather than send money over the internet, and that’s what she tries to facilitate.

“I understand there’s a hesitation to donate to organizations, and people like to see donations in the form of physical things,” she said.

She said the Ukrainian Canadian Congress does not fundraise, but has partners who do. She and other volunteers directed people who wanted to donate money to these places, which are listed on their website.

Arts and entertainment, occupation at the heart of the Downtown strategy | Local News