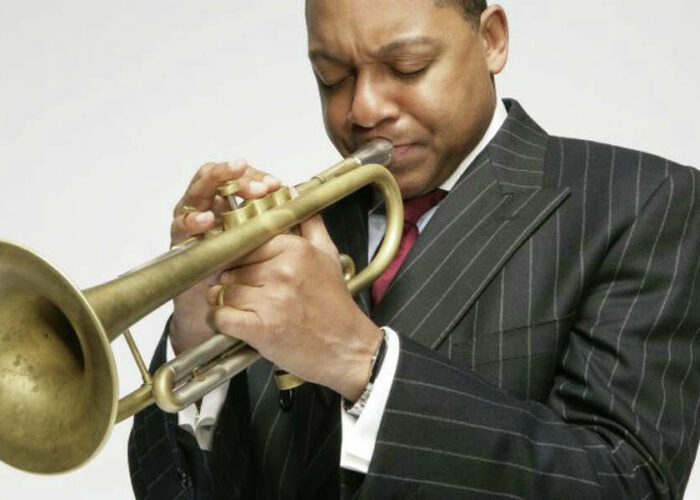 Jazz at the Lincoln Center Orchestra with Wynton Marsalis.

Arguments these days about what constitutes jazz seem almost quaint. Contemporary artists – many of them Houstonians such as Robert Glasper, James Francies and Chris Dave – have approached creative expression with a blank slate. They can and will use all the tools and sounds necessary to deliver the music they deem vital and contemporary.

Although Wynton Marsalis is only 61 years old, his arrival as a teenage phenom decades ago allowed him to shed his skin to become a veteran jazz statesman early on. And he suggests that all the old hype in jazz – the debate between innovation and traditionalism – was unnecessary.

It’s the proposition of our Constitution,” says Marsalis, who brings his Lincoln Center Jazz Orchestra to the Wortham Theater Center this week as it rocks in Southeast Texas. “You don’t want to rewrite the Constitution. Why would you do that? You had nine, 10 geniuses around him. I don’t think you push the music forward and do something different. East Schoenberg ahead of Beethoven? I never heard that. It doesn’t look like that. First of all, I don’t think any of them are ahead of Palestrina. They do different things. But you can play Palestrina music and think, ‘Man, what the hell is this?!'”

He believes there is no need to destroy and rebuild. Rather, music should exist independent of time and place.

Wynton Marsalis and the Jazz at Lincoln Center Orchestra

He cites his father, pianist Ellis Marsalis, as encouraging him to learn the history of music and find his way of expression there. This experience happened in parallel for Vincent Gardner, trombonist of Marsalis’ Jazz at Lincoln Center Orchestra and co-founder of Jazz Houston. Gardner also learned from his father, a jazz musician. “We had our own way of playing, and they encouraged us to be,” Marsalis explains. “Why then should we destroy our art form? Especially to imitate popular forms, what for? What do we have to give? he asks. “That’s what I’m looking at.

Marsalis in a repeatedly postponed Zoom call over story questions to Gardner. The trumpet player and composer heard Gardner in Florida decades ago and knew he wanted the trombonist in his band. This Gardner is a high-end, value-added arranger, as is his ability to sing. Marsalis also relies on him for other matters.

“He’s the real historian,” says Marsalis. “If I have a question, I call him and ask him.”

After a stopover in Galveston, Marsalis will be in Houston for a series of Jazz Houston events, including a performance for students at the Central Houston Public Library’s Barbara Bush Plaza, as well as visits to the Houston and Klein school districts for master classes. and workshops. He does this because Gardner and his wife, singer Belinda Munro, saw an opportunity in Houston — a city with a rich jazz history that remains alive despite the city’s formidable attrition of musicians to New York or Los Angeles. Gardner and Munro uprooted their lives in New York to reseed jazz in Houston through Jazz Houston, an organization that produces concerts, conducts a local jazz band, and also runs educational endeavors, including a youth orchestra.

A few weeks ago they produced a musical program celebrating Arnett Cobb, Illinois Jacquet and other Houston jazz legends.

“We try to celebrate the past, the present and the future,” says Gardner. “All centered around the city of Houston.”

Sow jazz in the city H

The creation of Jazz at Lincoln Center by Marsalis was crucial in a codification of jazz as a form of American music worthy of being treated in a concert hall. His goal was not to take him out of the clubs where the music was born more than a century ago, nor from the tight spaces where it began to flourish. He simply wanted to give jazz an institutionalized reverence comparable to classical music. He sought to canonize an American art form.

Jazz at Lincoln Center is flourishing in New York. Gardner and Munro saw opportunities beyond a city with an integrated jazz infrastructure, including legacy clubs and smaller spaces for more experimental fare.

“New York is the mecca of music, where you get the most direct and meaningful instruction,” says Gardner. “And the most opportunity.”

But he was intrigued by “all the mean cats that have come from Houston over the years.”

He spent time digging into the rudiments of the Texas tenor sound, the way saxophonists made prominent use of the low register in contrast to what others were playing in the ensemble. “I have a deep understanding and deep appreciation for that now,” Gardner says. “A lot of great stuff came from musicians in Houston being merged into the bigger jazz pool. I look forward to discovering more and bringing them to light, so that people can see what this great city has brought to the tradition of jazz.

And he also wants to maintain this tradition among young players.

“Why can’t we create an environment where this kind of local talent has an opportunity in the city it comes from?”

Granted, Gardner and Munro’s timing likely caused them to question their idea. They arrived before after Hurricane Harvey scoured the Gulf Coast and inundated Houston.

Like Marsalis, Gardner is a next-generation jazz performer. They both believe that education is just as crucial as acting. “You have to have this educational wing,” Gardner says. “To reach young people and encourage them to continue. And focus on those who come to listen to what you do.

That’s what he and Munro did here. Their line-up is remarkable, with thematic concerts that celebrate the history of jazz. Their work also digs deep into the ground: Last month, Munro sang works associated with Anita Moore, an understated Houston native who sang with Duke Ellington.

Moore died in 2001 with not enough attention for her glittering career. This September Jazz Houston show also included pianist Helen Sung, an HSPVA alumnus, and a performance by the Jazz Houston Youth Orchestra.

Like Marsalis, Gardner and Munro firmly believe that jazz can honor history without becoming a museum piece.

“I think young people of this generation are very familiar with self-identity,” he says. “And there is no better music in the world to affirm your identity than jazz music. They recognize that in the music. And I think that’s why they like to play it.

“Let the music be what it is”

“Pick who you want to pick in art history,” Marsalis says. “They have been educated. Bach was taught. With the possible exception of Berlioz. Maybe.”

Marsalis appoints a local professor, Bob Morgan, who for years was in charge of jazz studies at the HSPVA. In fact, Marsalis drops dozens of names during a conversation. The effect is not to arouse admiration in front of his acquaintances or his list of contacts, but rather to try to silence the notion of jazz as “another” form of art. Classical composers, iconoclasts like Willie Nelson, educators like Morgan: they are referenced to iron out discussions that create a sense of otherness, which can often be casually applied when it comes to race and class.

“Black and white are constructs that are not real,” he says. “When you start living in unreal constructs, you have to start inventing more and more things to make them real. The prejudices are real. But someone says ‘the Hispanic vote’… What is it is? Ecuador? Cuba? A certain class of Mexico?”

He says his mentor – legendary writer Albert Murray – asked, “How can you be a minority in your own country? Can a Frenchman be a minority in France? The terminology we use ‘jazz as a pure form’…jazz is a hybrid. There is no pure form.

Gardner says, “There’s a lot of things we look into, but I believe in letting the music be what it is. That will define what it is.

And Marsalis adds: “We need another mythology.

Thus Marsalis, at 61, and Gardner, ten years younger, contribute to codifying a new mythology. Gardner cites Marsalis as crucial in helping him structure Jazz Houston: things involving a board of directors, finances, management.

They will both take the stage for a performance as part of the Jazz at Lincoln Center Orchestra.

The name of Marsalis figures prominently there. But he sees their workload as shared.

“They don’t need me, Vincent is here to do his thing,” he said. “The trick is to get away from the cult of personality. I think it’s all of us. Vince is our musical director for this time.

“We are part of a continuum. And I love that continuum. …Vincent has the tradition and an investment in the community that will bear fruit. We are lucky to have a representative of this quality who will see a forest grow around him.